Political violence in South Sudan has dropped dramatically since the peace deal that was signed between President Salva Kiir and Riek Machar in September last year, according the UN.

Speaking to reporters at UN Headquarters in New York, a few days ago, David Shearer, the Head of the UN Mission in South Sudan said that many “positive things” have happened since the peace agreement.

He cited several peace meetings (about 17) around the country, and the integration of opposition and government figures in the armed forces.

“Since the signing of the agreement, there’s  been a number of positive things that have been happening. Right now, as we speak, opposition  members who were once fighting are in Juba participating in the peace building efforts,” Shearer said.

“They are moving around without any problems from the government”.

Shearer said that political fighting has “diminished greatly” and that some of the South Sudanese who were displaced as a result of the violence are beginning to express interest in returning to their country.

“The amount of political fighting in  the country has diminished greatly. There is still cattle rustling and ethnic violence, but political violence has dropped dramatically,” Shearer said.

Shearer, who is also the UN Secretary-General’s Special Representative in South Sudan, said that the success of the peace agreement will be partly measured by the extent to which people go back to their homes. He said that about 130,000 people have returned to South Sudan from neighboring countries since the September deal.

That progress notwithstanding, he said in the South of the country, fighters of Thomas Cirillo’s National Salvation Front have been involved in clashes with government forces.

He also expressed concern at a loss of momentum in the peace process, with recent meetings lacking substance or real outcomes.

Nonetheless, Shearer stated that, overall, progress has been much better than expected, and urged the international community to “speak as one voice”.

On the whole, he said progress which seemed unlikely five months ago, has been made, and expressed optimism that in the next five months, South Sudan will be in a better and positive place.

His comments follow an appeal for funds from the UN International Organization for Migration (IOM) to support displaced people and returnees in South Sudan.

The UN Agency is appealing for USD 122 million, to help nearly one million people, and over 80 humanitarian and development partners throughout 2019.

In the five years since conflict broke out in South Sudan, more than four million people have fled their homes, and almost two million are displaced within the country.

“We need to support the people of South Sudan, as the country pursues a peaceful and stable future,” Jean-Philippe Chauzy, IOM South Sudan Chief of Mission said this week.

IOM said that though the intensity of the conflict has decreased since the signing of the peace agreement, the country still faces the devastating humanitarian and financial costs of the protracted crisis: sustained poverty, intermittent famine, persistent protection concerns, a lack of livelihood opportunities and access to many basic services.

“Although some people have decided to return home, or have indicated that they will do so soon, many are still living in displacement sites. They will not be able to return in 2019. So, despite the signing of the revitalized peace agreement, conflict related displacement continues, albeit on a smaller scale than in the past,” Chauzy said. 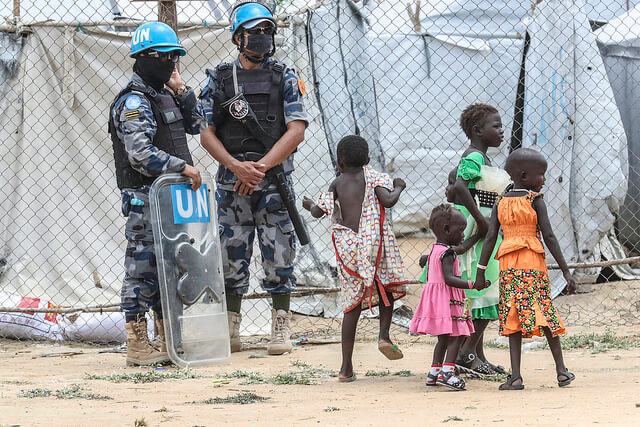