Ugandan and Rwanda nationals on social media continue to react to the sacking of contraversial Rwanda Minister of State in the Ministry of Foreign Affairs and International Cooperation in Charge of East African Community, Olivier Nduhungirehe, with many saying his removal from office was long overdue, describing him as disrespectful, arrogant and one who lacked diplomacy.

President Paul Kagame through the country’s Prime Minister Édouard Ngirente on Thursday relieved Nduhungirehe of his duties for acting based on personal opinions over government policies.

“Today, 9th April, the President of the Republic of has removed from office Ambassador Olivier Nduhungirehe for consistently acting based on personal opinions over government policies, while serving as Minister of State in the Ministry of Foreign Affairs and International Cooperation in Charge of East African Community,” Ngirente announced in a communiqué.

Nduhungirehe who was appointed in the position in August 2017, has been so vocal in the ongoing tensions between Uganda and Rwanda. He is known for using his social media platforms especially twitter to throw unfounded accusations against Uganda and her government officials despite the existing diplomatic channels.

He has on a couple of times headed Rwanda’s delegation for the Ad-hoc Commission on the Luanda Memorandum of Understanding (MoU).

Nduhungirehe would get bashed from nationals of both Uganda and Rwanda whenever he posted his endless accusations against Kampala, wondering why he was opting for social media. In fact, he was accused of being behind the multiple twitter trolls demonising and falsely accusing Uganda and her leaders. He was accused of escalating the stand off between the two countries.

On Thursday, when news of his sacking broke out, many Ugandans and Rwandans took to social media to remind him of how they used to caution him against acting out of what they termed as excitement and instead, opted to be arrogant, disrespectful and irrational.

Olivier Nduhungirehe was a disgrace to the ministerial position he was appointed to. Worst Rwandan Minister ever, very divisive. Good riddance to him. He made many people worldover to hate Rwanda.

Wow l have been dancing to the tune of this news. Just downed a bottle of Double Black thanks Uncle Paul.

This guy escalated the tension between Uganda and Rwanda, by posting and talking ill and nonsense.

Hope he will continue with his arrogance? Lets wait for the arrest soonest.

This is good. The man was arrogant. He could speak as if he owned the country. We should always be humble as we serve people.

Amb.Olivier made two mistakes, first one he completely failed to know what a diplomat is,and he became so arrogant and abusive. Secondly, he recently mourned Hutus who died during the manslaughter period of Rwandan Genocide. And boom, he is finally sacked.

He was creating more problems between two sister countries Rwanda and Uganda. I happened to follow all his statements they weren’t to unite the two leaders who have been together in trenches of Luwero. It’s good that he was dropped. At least diplomacy between Rwanda and Uganda will be done smoothly. 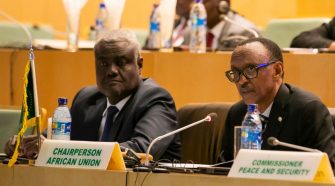