Saracen Uganda Limited (SUL) has condemned acts of violence following an incident in which a man was shot and killed by one of the security firm’s personnel outside a shopping mall in Naalya.

Ainebyona Anorld Mugisha, one of the owners of Hickory Bar & Restaurant in Kololo, was shot dead by a security guard in the parking lot at the Quality Shopping Village Parking Lot in Naalya on Tuesday.

Saracen has issued a statement describing the incident as “regrettable”.

The security company says two of its guards who were involved in the incident have sustained severe injuries, and one is in critical condition. A video captured by someone on the scene showed a group of people surrounding the security guard who was lying down, and kicking him repeatedly.

“Saracen strongly condemns any manner of violence and seeks to promote law and order and harmonious interaction with the public,” the statement reads in part.

“We assure the public, our clients, and staff, of our commitment to respect the rule of law, the observance of human rights, and sanctity of life”.

The company does not give an account of what transpired and events that led to the murder of Arnold, but has said it has offered full cooperation to the Police “to establish what exactly led to this unfortunate incident”.

Police said on Tuesday that witnesses said the deceased and his two other colleagues had gone to the supermarket for shopping but Ainebyona remained in the car.

After shopping, one of the three released a trolley which knocked one of the cars in the parking.

In the process of reversing, the deceased knocked at the foot of a one Awaze Babu, a security guard at Quality Super Market.

According to ASP Luke Owoyesigire, the Kampala Metropolitan Deputy police spokesperson, this prompted an exchange of words between the three customers and the two security guards at the supermarket.

The security guard, identified as Angoria Moses, then picked a gun and shot at Ainebyona.

”Angoria rushed to the sentry box where he picked his SAR gun and shot the deceased at the mouth while he was on his steering in the car. His colleagues thereafter rushed him to Independent Hospital Ntinda where he died,” Owoyesigyire said. 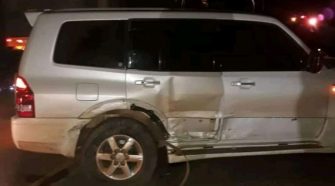