Government has warned that schools which have defied President Yoweri Museveni’s order to embrace the Patriotism Clubs will be closed.

The Commissioner for Patriotism in the Office of the President, Brig Patrick Mwesigye said Tuesday that schools which do not implement the directive by President Museveni on introducing Patriotism Clubs will have their licences revoked.

He was speaking at an event in Bukoli town, Bugiri district where a total of 3,800 students who have been undergoing training on Patriotism were passed out.

A report presented by Gilbert Setuma, the Coordinator of Patriotism in Bugiri district during the event indicated that 8 out of the 38 Secondary schools in the district have refused to form Patriotism Clubs. The said schools consider these clubs as not important.

Brig Mwesigye while speaking to the press on the sidelines of the event said; “H.E President actually, if I’m to use his words, said that such adamant owners of schools and head teachers can cause the revokation of certificates of those institutions, if we really have to be serious”.

“So, those who will remain adamant, if we go to them and they say they dont want, we will think about the message of the President,” he told reporters.

Museveni is the Patron of the Patriotism Clubs in Uganda.

“It was agreed unanimously in our meeting by all school owners. So, they must show cause why they have not participated,” he said.

In 2009, President Museveni launched a new strategic national program to “inculcate norms and values of patriotism in students and youth in all secondary schools”.

Subsequently, Patriotism Clubs were established in secondary schools all over the country.

The launching of these patriotism clubs in secondary schools was intended to nurture new generations of Ugandans with new, positive attitudes towards their country, work and themselves.

The program aims at encouraging students and teachers to become a new breed of enlightened citizens, committed to national service among other objectives.

Under the program, students are trained to concentrate on their studies so that they lead them to academic excellence and acquiring of a profession or skill that is marketable on job market.

They are also trained to do sports and exercises so as to keep fit and usefully dissipate their youthful energy to remain healthy.

The other component is helping their parents with homestead work or any other work during holidays. 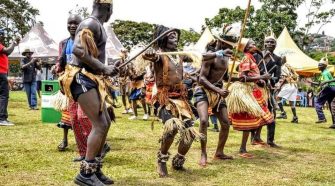