Police spokesperson, CP Fred Enanga has asked State Minister for ICT, Idah Nantaba to let Police carrybout its investigations into the circumstances surrounding the killing a one Ronald Sebulime following allegations that he had been trailing her (Nantaba) with an intention of assassinating her.

Ssebulime was shot dead in March this year by officers of the Uganda Police after he had been arrested and handcuffed. The incident occured at Nagojje, in Mukono district.

Several Police officers including Ssali Edward, who was the car commander, PC Opira Ronald and PC Baganza Ronald have since been arrested.

However, on Saturday while addressing hundreds of people at a congregation at Bukolooto Seventh Day Adventist Church in Kayunga town, Minister Nantaba castigated Police and other security organs for harboring elements that assasinate Ugandans.

She said there are some highly placed “untouchables” in government and security agencies who are the masterminds of different murders. Had it not been for the mercy of God, she would not have survived death in March, she said.

On Monday, while addressing journalists in Kampala, Police spokesperson, Fred Enanga said the Minister has failed to cooperate with the Police in the ongoing investigations and has decided to run to the media.

“We still needed to work together with her to get a detailed statement. We would have relied a lot on a detailed statement released to the Police by the Hon Ida Nantaba which she didn’t give. If you look at the statement she gave us, there is still a lot of information lacking that you cannot use to build substantial leads,” Enanga said on Monday.

“She has decided to go to the media and confront the Police through the media, but for us, we still want to encourage her to allow our teams to get a detailed statement from her,” he added.

In her narration of the incident in March, Nantaba alleged that through the phone, there were ‘orders from above’ given to the Police officer who had arrested and handcuffed Ssebulime, to shoot him dead instead.

But Enanga says there is not phone data to confirm the allegation.

“The call data records of our officer Ssali and late Ssebulime show no support to the claim that there was someone behind the phone conversation, a person who gave a superior order. There is not anything like that,” he adds.

He says Police has used its expertise and evaluated the obtained call data records from MTN Uganda and Airtel Uganda and found “nothing substantial” supporting the Minister’s claims.

He adds that the file of Minister Nantaba still stands as a mistaken identity until new developments emerge.

Enanga says Police carries out joint investigations with other security agencies, adding that if the Minister is not contented with how Police is handling the matter, she can engage other security organs. 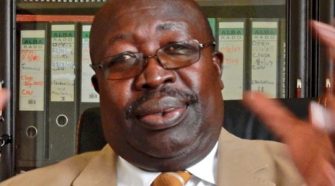