Police in Mbarara is hunting for a security guard for allegedly shooting to death an 18-year-old on New Year’s Day.

The suspect has been identified as Denis Byamukama, 22, who is attached to Agri Security Company Limited, a private security firm in Mbarara.

According to the Police spokesperson for Rwizi region, ASP Samson Kasasira, Byamukama shot and killed a one Sajja Unisu alias Isma, at close range along Mbarara high street on January 1, 2019 at around 2:25am. The deceased was shot in the head.

Isma was a casual laborer in Mbarara town and a resident of Nyakinemgo cell, Biharwe Division in Mbarara district.

According to ASP Kasasira, the security guard is still on the run.

In a related incident, Police in Rukiga district is holding a security guard attached to New Securiko Uganda limited, Kabale branch for allegedly losing a gun while drunk on New Year’s Eve.

The guard identified as Roland Rukundo had been deployed to guard the premises of Rukiga Savings Credit Cooperative Branch in Nyaruziba Kashambya sub-county, Rukiga district.

According to the Kashambya sub-county Chairperson, Elineo Bandaganire, Rukundo was Wednesday evening beaten by locals after while drinking, he threatened to shoot them.

Locals later managed to disarm Rukundo and they damaged the fire arm.

The O.C CID for Rukiga Central Police Station, Detective ASP Onesmus Kamugisha said that investigations are completed, the security guard will be arraigned in court.

Reacting to the two incidents of gun misuse by security guards, ASP Samson Kasasira said these were isolated incidents by a few indisciplined security personnel.

“Of course those issues are there but I don’t want you to become an alarmist. There are cases of indiscipline among these security guards but they are minimal,” ASP Kasasira told SoftPower News.

He also attributed such behavior to fear among these armed security personnel that sometimes pushes them to discharge fire in a bid to scare off elements they consider harmful to them.

He however also said that in  some instances, security guards are involved in stealing guns with an intention to use them in armed robberies.

“We have hard issues where we have had guards engaging in stealing guns like the one of last year. Two guards were arrested after  they attacked a Tiger security guard in Kikagati and took his gun. Then they used the same gun to terrorize parts of Rubindi here in Mbarara, but we later managed to recover the gun,” explained Kasasira.

He appealed the public to always respect security guards while they are on duty to prevent such incidents.

He also said that as police they will stop single deployment of security guards as a preventative measure.

“They always have single deployment which is a major cause of their fear. On seeing a group of people approaching, the only option they consider is to shoot because the likely risk is losing a gun, life or property of the client,” the Police spokesperson for Rwizi region said. 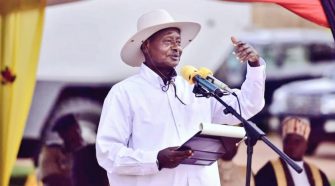