The former Executive Director of the Uganda Wildlife Authority (UWA), Andrew Seguya and the founder of the Ngamba Island Conservation Trust, Lilly Ajarova are among those vying for the position of chief executive at Uganda Tourism Board

Three individuals have been shortlisted for interviews by the Public Service Commission for the position. They include Andrew Seguya, Lily Ajarova and Ochieng Bradford Robbster.

The current CEO of UTB, Stephen Asiimwe tendered in his resignation letter months ago and is due to officially leave office in the next few weeks. Asiimwe recently told SoftPower News that new opportunities, still in the tourism sector had opened up and he had considered to transition from UTB.

Earlier this year there was a major restructuring at UTB with most of the staffers at the agency losing jobs.

The requirements for eligible candidates for the position of chief executive include a Master’s Degree in Management or Business Administration or Tourism or Marketing or Law or any course related to these disciplines.

Applicants were also required to have a minimun of 10 years working experience in handling Board governance, 3 of which should have been served at the level of Head of Department and above in a reputable organization.

Seguya was the head of UWA until March this year. Seguya had been at the helm of the wildlife conservation body since 2012.

Ajarova is the Executive Director Chimpanzee Trust, a global Conservation initiative that manages Ngamba Island Chimpanzee Sanctuary. She has previously served on the Board of UTB.

Ochieng Brandford Robbster previously worked as the Director for Corporate Affairs at the Public Procurement and Disposal of Public Assets (PPDA), a position he has served for the last 6 years. He was also Deputy Director of Uganda Investment Authority.

These are required to hold a Master’s Degree in Management or Business Administration or Tourism or Marketing or Law or any course related to these disciplines.

The other requirements are a minimun of 8 years working experience in handling Board governance, 3 of which should have been served at the Managerial level/Deputy Head of Department and above in a reputable organization.

Uganda Tourism Board is the government agency responsibile for marketing Uganda locally and internationally. 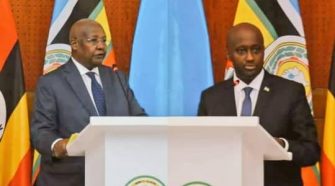