Dozens of locals and tourists gather at the Kitagata hotsprings.

Residents in Sheema district have strongly opposed a proposal by the local government to start charging users of the popular “Kitagata” hot spring located in the area.

Hot spring users were angered after receiving a letter from the district stating that individuals using the natural facility would be required to part with money.

“You are requested that by early next year, everybody shall pay Shs 2,000 daily to use Kitagata hot spring,” read the letter by clerk to council which was copied to the Speaker, District chairman, Chief Administrative Officer and the Town councillor from Kitagata.

Kitagata hot springs are located off the Ishaka–Kagamba Road in Sheema South county in Sheema District ,Western Uganda. Two hot springs sit adjacent to each other.

According to locals, one of the springs known as “Ekyomugabe” was used by the former King of Ankole called “Omugabe”.

The other hot spring was dubbed “Mulago Hot Spring” as locals believe it has healing powers as well as blessings to the users.

The spring waters in the area contain chemicals and varying amounts of minerals like sodium chloride, potassium chloride, lithium sulphate, calcium sulphate, among others which are known to have medicinal value in them.

Several people with different ailments flock to the springs on a daily basis to bathe in the warm water. The water in the springs can warm up to 80°C (176 °F). It is estimated that about 800 people visit the springs per week.

The springs are fed by River Ngaromwenda which flows from Buhweju district.

Last month, the State Minister for Tourism, Godfrey Kiwanda Suubi together with officials from the Uganda Tourism Board visited the springs and promised to work with the district to revamp the area and position it as a tourist attraction.

The Sheema district Chairman, Canon David Kabigumira told SoftPower News on Friday that there are indeed plans by government to take over the management of the Kitagata hotsprings since they are situated on government land. He explained that government has already identified a developer who will give the hotsprings a facelift to make it more attractive to tourists.

“It is not that we are charging the users. The district’s stand is that Kitagata hotsprings are a natural resource and they should be a source of revenue for the district,” the Chairman said.

He said that currently, the management and services including accommodation provided by private individuals at the hotsprings are unregulated and ineffective.

“There are people who built houses near the hotsprings to accommodate guests who spend the night. But there are no toilets and the ecosystem has also facilitated insecurity since criminals use these houses as hideouts,” he added.

“The hotsprings should be developed as tourist sites. We have already identified some people who will do this. We need to establish bath tabs where people can bathe conveniently. The hotsprings in their current state embarrass some of the visitors. It is so exposed”.

He said that the decision to develop the hotsprings was reached after holding a meeting with local leaders including LC1 and LC2 Chairpersons who agreed to the proposal.

He however clarified that the district has not imposed any fee for users of the hotsprings at the moment but said that the town council would soon convene a meeting and come up with a harmonized fee.

Asked what the locals stand to benefit from this facelift, Kabigumira said that the district will assess the needs and services required by the community and provide them.

However, on their part, some of the residents in the community near the hotsprings are opposed to the idea claiming that the springs are a free God given feature which should not be taxed by anybody in the area.

They claim that area MP, Prof Ephraim Kamuntu who doubles as the Minister for Tourism, as well as the Sheema LC V chairman, Kabigumira are behind the scheme which they say is intended to benefit the two.

“Go and tell Kamuntu and Kabigumira that they should leave alone our Kitagata. This hot spring was here even before we were born. Nobody has ever taxed it, so, if you want to bring your poverty on our hot spring, know that we as people of Sheema we shall beat and lock you in your houses,” a furious local commented.

A native of the area who sought to speak on condition of anonymity said the hot spring is a God given resource and that when authorities attempted to impose a tax for its use in the early 1990s, the warm water turned cold and it was covered by papyrus.

“When the tax was scrapped, the water again turned warm and the papyrus disappeared,” the 72-year-old woman told this website.

“So, government leaders should refrain from imposing a tax on our Kitagata [hotspring] which was created and blessed by God to cure people’s diseases,” she added.

In order to ensure good hygiene of the facilities, locals in the area have over the years established rules to regulate the use of the hotsprings.

Users are not allowed to engage in fighting, making noise, smoking or even use of soap. Children have to be dipped in dressed in their nappies.

The Mayor Kitagata town council, David Atwiine on his part labelled critics of the move to tax the users of the hotsprings as saboteurs of development.

He said authorities at the district level will engage the community in a meeting next week in a bid to reach a common ground.

“We need to advise our people such that they can accept to pay that revenue,” Atwiine told SoftPower News.

By press time plans to fence the springs as well as constructing a gate on the entrance were underway. 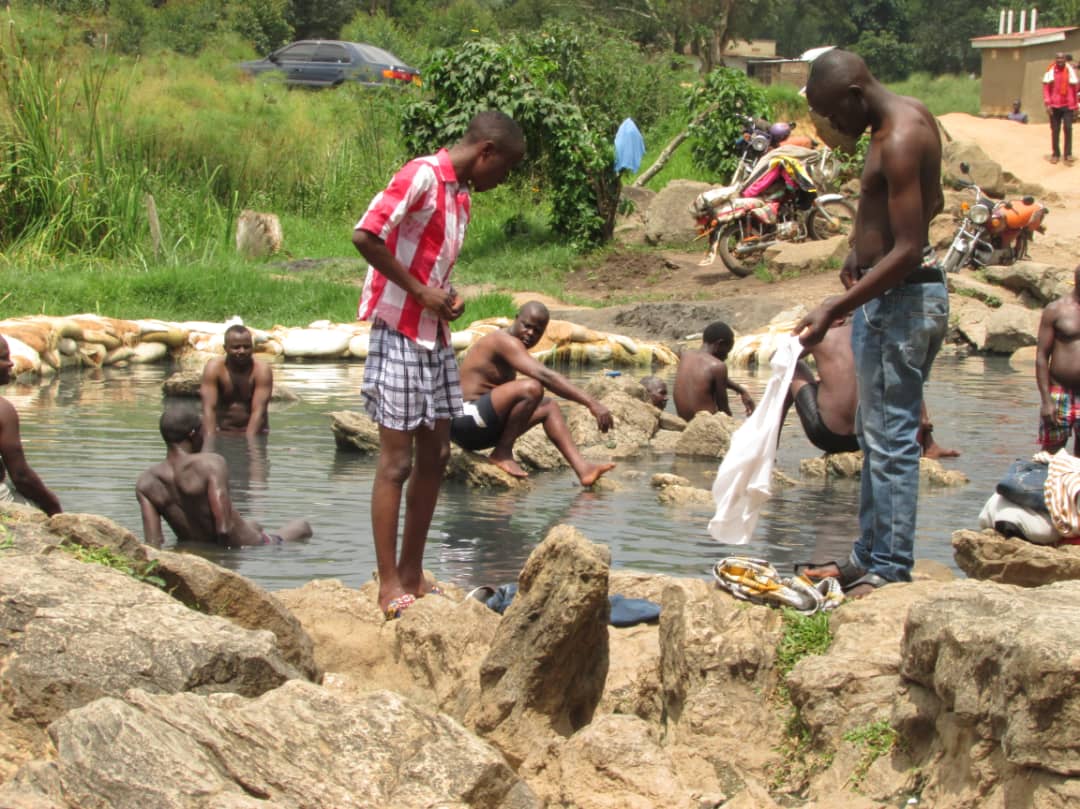