The move by section of Members of Parliament to have Minister of Security, Gen. Elly Tumwine censured for contemptuous conduct towards Parliament has been unsuccessful after the MPs failed to raise the required minimum signatures.

Last week, Parliament passed a motion paving way for the commencement of the process to have the Minister censured on accusations of arrogance, interfering with the work of Parliamentary Committee that was investigating torture in Safe Houses.

Tumwine is also faulted for stopping the Director of Internal Security Organization (ISO) Brig Col Kaka Bagyenda from appearing before the Committee.

The motion was unanimously passed by all members of the House but it has hit a snag as the movers could not raise the 150 signatures.

According to Article 118 of the Constitution, Parliament may, by resolution supported by more than half of all members of Parliament, pass a vote of censure against a Minister on the grounds of; abuse of office or willful violation of the oath of allegiance or oath of office; misconduct or misbehavior; physical or mental incapacity, namely, that he or she is incapable of performing the functions of his or her office by reason of physical or mental incapacity; mismanagement; or incompetence.

Kasambya County MP, Gaffa Mbwatekamwa who tabled the motion told reporters at Parliament that the proponents of the motion have so far collected only 39 signatures which is far below the required 150 signatures, which they were required to have collected before Thursday.

Mbwatekamwa said it is unfortunate that the very MPs who were debating with a lot of energy to have the Minister censured later chickened out.

“I have decided to do so after we realized that even if we are given 100 days to collect signatures, we can’t have the 150 people to sign given the fear installed among members and as such this petition can’t see light,” Mbwatekamwa said.

“I have thus written to the Speaker to withdraw the motion specifying reasons as to why I have taken the decision; I call upon Ugandans to stop trusting those members who act before the cameras including Members of the opposition but have shied away from the noble cause,” Mbwatekamwa added.

He said the supporters of the move shall at an appropriate time come out and reveal names of those brave members that signed to have the minister censured.

However, his colleague Manjia County MP John Baptist Nambeshe disagreed with the withdrawal of the motion saying that MPs who appended their signatures were not consulted over this move of withdrawal.

He says at least the MPs would have been given chance to pen their signatures to rise to a reasonable number.

Nambeshe alleges that most of the MPs have been bribed not to pen their signature to the petition. 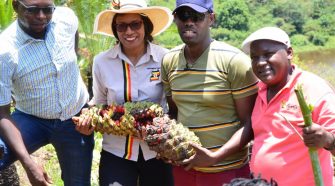