Musician Mayanja Ibrahim alias Big Eye has said his planned walk to Bobi Wine’s home in Magere which he was scheduled to take place today, Thursday, did not proceed because Police gave him no response.

On Saturday, Big Eye wrote to the Inspector General of Police seeking clearance to march to the musician’s residence together with a group of people to petition him on the alleged mistreatment of musicians supporting the ruling political party National Resistance Movement (NRM) by supporters of opposition pressure group, People Power which he (Bobi) leads.

In his letter, Big Eye requested for security from Police as he holds “a peaceful demonstration” with a group of people between 50 and 100 in number, protesting “the mistreatment of NRM musicians by the People Power supporters for not agreeing with their political side.”

He said their demo would start at Kalenda Hotel in Makindye Division to Magere in Gayaza, outside Kampala.

However, on Thursday afternoon, the musician told SoftPower News that he has since not received any reply from the Uganda Police on his security request.

“Police did not respond to me and this is why I have not marched to Magere today,” said Big Eye.

On Wednesday, visibly angry revelers turned rowdy as soon as Big Eye stepped on the stage at an event organised by NBS television at the Uganda museum. They threw bottles at him as they asked organisers to pull him off the stage.

He says, this is another reason for him not to walk to deliver Wine a petition. He said: “You also saw what happened to me yesterday at the Museum. So, I chose to tone down a little bit on that.”

In a video clip posted on his Facebook page, Big Eye condemned the rowdy revelers saying such crowds are a mix of people with different political beliefs who should not be dragged to unnecessary fights.

“In such crowds people of different political sides come to enjoy and have fun, not politics. These people think they own this country, which is not the case. Bobi Wine should reign in on his supporters,” he said.

Musicians Catherine Kusasira and Jenifer Nakanguubi alias Full-Figure who were recently appointed Presidential Advisors, also suffered the same assault a couple of days back at Nabugabo Sand Beach during a Boxing Day concert in Masaka.

They were as well pelted with bottles and chased off the stage by revelers who accused them of publicly supporting President Yoweri Museveni. 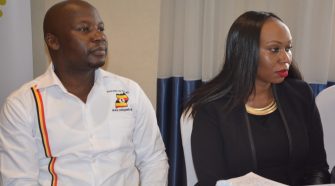