Authorities in Burundi have blocked social media platforms including Facebook, Twitter and WhatsApp as the country votes for a new President that will mark the end of Nkurunziza’s 15-year rule.

Burundians are also electing new representatives in the National Assembly.

Reports by local media indicate that only individuals with Virtual Private Networks (VPN) can access social media. Burundians authorities are yet to comment on the matter.

Although there are 7 candidates in the race, tght competition is between the ruling party CNDD-FDD candidate Évariste Ndayishimiye and Agathon Rwasa from the opposition party, National Congress for Liberty (CNL).

All the candidates cast their ballot in the morning although Rwasa denounced the blocking of social media, describing it as unfortunate and that “it could be a way of rigging elections.”

According to local publication, IWACU Burundi, journalists were reportedly restricted from taking photos of opposition candidate Agathon Rwasa while casting his ballot.

The election which has so far been generally peaceful has witnessed reported cases of arresting some leading members of the main opposition party CNL representatives from a polling station in Bururi Province on Wednesday the morning. They were later released after voters protested.

The small East African country has been marred by political violence since its last election in 2015 which saw President Pierre Nkurunziza run for a disputed third term in office. A failed coup left many dead.

Having ruled Burundi with for 15 years, many observers say Nkurunziza’s influence will still linger even after the polls that are likely to be won by his party’s candidate.

Meanwhile, if no presidential candidate receives a majority of the vote, a second round will be held on 19 June. 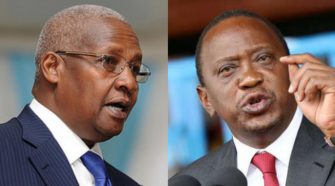