A statement posted on the official website of the U.S embassy in Somalia on Wednesday stated that the reopening is “another step forward in the resumption of regular U.S.-Somali relations, symbolizing the strengthening of U.S.-Somalia relations and advancement of stability, development, and peace for Somalia, and the region”.

The embassy closed on January 5, 1991 following a mass evacuation of 281 American and foreign diplomats and civilians in the wake of a violent civil strife.

In December 1990, violence had quickly enveloped the city of Mogadishu as armed militants began clashing with government soldiers in protest of the administration of then leader Siad Barre.

On 1 January 1991, the US Ambassador to Somalia, James Keough Bishop, contacted the Department of State requesting an evacuation of the embassy.

“Since the closure on January 5, 1991, the United States has maintained its partnership with the Somali people, including the re-establishment of a permanent diplomatic presence in Mogadishu in December 2018 with the U.S. Mission to Somalia,” the Wednesday statement reads in part.

The reestablishment of U.S. Embassy #Mogadishu today is a sign of our commitment to partner with #Somalia in its effort to build a stable, credible, and democratic country. https://t.co/AqzKk18IwP

Officiating the transition, Ambassador Donald Yamamoto said, “Today we reaffirm the relations between the American people and the Somali people, and our two nations”.

“It is a significant and historic day that reflects Somalia’s progress in recent years, and another step forward in regularizing U.S. diplomatic engagement in Mogadishu since recognizing the federal government of Somalia in 2013”.

The statement further affirms the commitment by the U.S to remain a strong partner to Somalia in its effort to build a stable, credible, and democratic country.

The U.S State Department sent two consuls to Mogadishu in 1956 to establish a diplomatic post. On July 1, 1957, the United States Consulate-General in Mogadishu opened.

The consulate was an offshoot of the US embassy to Italy. At the time, Mogadishu was the capital of the Trust Territory of Somalia, a United Nations Trust Territory under Italian administration that was scheduled to become independent in 1960.

In addition to establishing a presence, the consulate staff were also charged with political research and developing relations with future Somali leaders.

On July 1, 1960, the Trust Territory of Somalia (the former Italian Somaliland) became independent and united, as planned, with the briefly extant State of Somaliland (the former British Somaliland) to form the Somali Republic (Somalia).

The United States recognized and established diplomatic relations with the Somali Republic the same day.

It is then that the U.S consulate-general was elevated to embassy status and its Chargé d’affaires, Andrew G. Lynch, was appointed ambassador on July 5.

In December 1992, the embassy compound was reoccupied and repaired to serve as a headquarters for U.S. personnel within the Unified Task Force and, following the transition to UN control, a base for UNOSOM.

The U.S worked with various parties in Somalia to establish peace and formally recognized the newly established Federal Government of Somalia in January 2013.

In May 2015, U.S Secretary of State, John Kerry visited Somalia and stated that the US plans to reopen its embassy soon; the Somali government presented him with the real estate deed for land reserved for the new U.S embassy compound in Mogadishu. 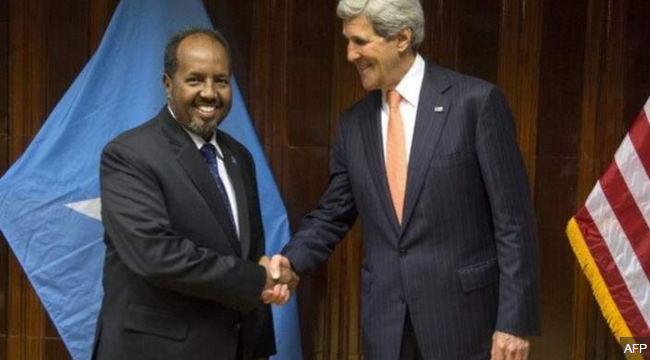 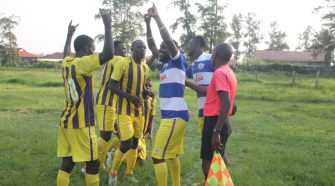