The Special Representative of the Chairperson of the African Union Commission for Somalia (SRCC) Ambassador Francisco Madeira has commended AMISOM Police for their dedication to duty, commitment to the mission and selfless service to the people of Somalia.

Ambassador Madeira was speaking in Mogadishu on Tuesday during a ceremony to award medals to 160 Formed Police Unit (FPU) officers from Uganda who have finished a year-long tour of duty in Somalia.

“Members of this unit have been exemplary, diligent, committed and dedicated in selfless service to humanity and attainment of peace in Somalia. In this regard, AMISOM extends hearty congratulations to the officers—men and women—of this unit,” Ambassador Madeira said.

The unit also supported the transformation of the Somali Police Force into an effective and credible organization that strictly observes and adheres to international policing standards.

Ambassador Madeira further said that in implementing the Somali Transition Plan—an important roadmap to the eventual handover of managing peace and security to Somali’s own security forces—AMISOM will ensure that capacity and professionalism is built to help Somali Security Forces assume security responsibilities by the end of AMISOM’s mandate.

The Acting AMISOM Police Commissioner, Rex Dundun, said the outgoing unit had offered professional support and their contribution towards pacification of Somalia was noteworthy.

“I am impressed by the professionalism, bravery and discipline of these officers from Uganda. To serve as peacekeepers in a hostile environment like Somalia calls for individual sacrifice and tenacity.”

The ceremony was attended by, Brig. Laki Kidega, Deputy Sector 1 Commander, Col. Frank Kyambadde, senior AMISOM police officials and representatives of the government of Uganda, among others. 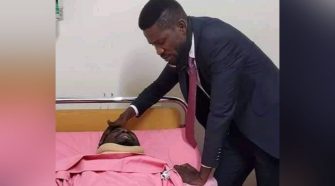