The World Bank has reported insignificant progress in improving the quality of policy and institutional frameworks in Africa’s poorest countries in 2018.

This is according to the 2018 World Bank’s annual Country Policy and Institutional Assessment (CPIA) released Wednesday.

The average CPIA score in Africa’s 38 International Development Association (IDA)-eligible countries in 2018 remained unchanged at 3.1 on a scale of 0 to 6, with some areas of social policy seeing improvements while macroeconomic management weakened.

The rule of law, accountability and transparency, and the quality of public administration remained major areas that impede the efficient use of public resources across the region.

This year’s CPIA Africa report takes a closer look at debt management, as the median government debt-to-GDP ratio reached 54.9 percent of GDP in 2018, an 18.5 percentage-point increase since 2013.

At the same time, the share of foreign currency bonds in total external debt increased by 10 percent while the shares of debt owed to commercial and non-Paris Club creditors rose by 5 percentage points since 2010, and sovereign bond issuances have increased rapidly.

“Some African countries are at risk of mortgaging their people’s futures in favor of today’s consumption,” said Albert Zeufack, Chief Economist for Africa at the World Bank.

“When countries spend most of their revenue servicing debt, fewer resources are left for education, health, and critical services for their people. This stops progress in its tracks.”

Taken together, the increase in debt levels paired with the shift of external debt toward more market-based, more expensive, and riskier sources of finance have increased debt vulnerabilities substantially among IDA countries in Sub-Saharan Africa.

The report recommends that countries improve their debt management capabilities and systems, which can enhance transparency and help stabilize the economy in the long-term.

Rwanda continues to top the CPIA ratings both in Africa and around the globe with a score of 4.0, followed in the region by Cabo Verde (3.8) and Kenya, Senegal, and Uganda (all at 3.7).

South Sudan remained the lowest-scoring country on the CPIA with a score of 1.5.

Fragile countries in Sub-Saharan Africa improved slightly in the areas of gender equality, human development, and environmental stability, which bodes well for their ability to tackle the drivers of conflict and exclusion.

Non-fragile IDA countries in Africa performed on par with their global peers overall, with the notable exception of social inclusion policies, where they underperformed especially on the issue of gender equality.

“Improvements in social inclusion and service delivery have historically been crucial elements of countries’ transitions out of fragility, so even modest steps count,” said Gerard Kambou, Senior Economist and Lead Author of the CPIA report.

“African countries, fragile and non-fragile, need to keep the focus on gender, education, health, climate, and governance issues alongside macroeconomic management if they want to see true and lasting progress,” he said.

The report team plans to hold discussions on this year’s results and recommendations in several African countries in September 2019.

IDA is one of the largest sources of assistance for the world’s 75 poorest countries, 39 of which are in Africa. 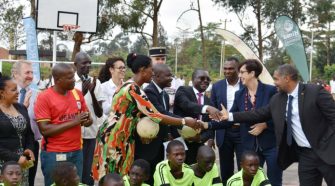