Government of Uganda has Friday dismissed media reports that a top Venezuelan politician used a Ugandan passport to smuggle his son to China, following heightened political tension in Venezuela.

This week, a story was published in British tabloid, Daily Mail,
claiming that 17-year-old Tito Cabello, the son of Diosdado Cabello, the leader of Venezuela’s National Constituent Assembly (ANC), flew from Cuba, through Russia to China using a Ugandan passport in the names of Tito Contreras.

According to the report, his sister, Daniella Cabello, also allegedly used a U.S passport to Shanghai on Sunday and both children boarded the Havana to Beijing flight as Desiree Contreras and Tito Contreras.

Now, the Spokesperson of the Ministry of Internal Affairs, Jacob Siminyu, has described the reports as “false and unfounded.”

He says the Ministry has cross checked from all places which issue Ugandan passports including Kampala, Mbarara, Pretoria in South Africa, United kingdom and the United States, and found no data indicating the issuance of a passport in the names cited by Daily Mail.

“The Ministry of Internal Affairs has never issued any passport in the names of Tito Contreras and therefore, the allegations are unfounded,” Siminyu told reporters at the Media Centre on Friday.

He also dismissed allegations that the recently introduced East African passport is being rejected as an official travel document by some countries, saying no evidence of such has been raised.

He says “our passports are genuine and Ugandans use them to travel and embassy has denied it.” 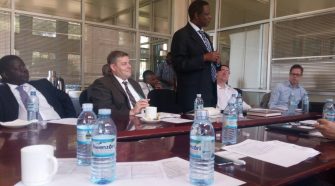