Afro-soul superstar Shifah Musisi put on a powerful and emotional performance at her Up-close concert held last Saturday at the Wizarts Auditorium in Ntinda.

Shifah Musisi took to the stage at 7:30 pm to loud cheers from her anxiously waiting fans and opened the show with her soothing song ‘Life Without You’ before she performed ‘Munsi Eno’ off her upcoming album titled “Dark and Happy Times”.

The crooner and guitarist then took the adoring audience through songs like ‘Sanyu lyange’, ‘Owoluganda’ and ‘Muntumulamu’ among others.

This gave way for non-musical session as she opened up to her fans about her life. While she recounted the tragic events that transpired on her 20th birthday, Musisi broke down in tears. On the fateful day, she lost two of her friends.

Revellers couldn’t help the tears as Musisi performed two emotion evoking songs ‘Sandewe’ and ‘Mwalage’, the latter that she dedicated to her two deceased friends.

Renowned comedians ‘Crazy University’ then took to the stage to lighten the mood and moments later, people were eyes wet in laughter as the comedians put on a great performance.

Female dancehall star and Shifah Musisi’s close friend Naira Ali then excited the audience with a spirited act. The talented performer had everyone on their feet as she performed her single ‘So high’ a rendition of Busy Signal’s ‘Come over’.

The last segment of the show saw Shifah Musisi perform a rendition of ‘Munsi eno’ with Congolese guitar sensation Charmant Mushaga who features on the original song.

She closed the show with her upcoming single ‘Emirembe’ which is set to be premiered this week. The show ended a few minutes past 10pm and left the sizeable crowd yearning for more.

This was a first of its kind show where fans didn’t have to part with a coin to watch their favourite artiste get upclose and personal. The invite-only show saw her diehard fans win invites by answering questions about her career and personality on social media.

For this talented songstress and guitarist, the sky is indeed the limit. 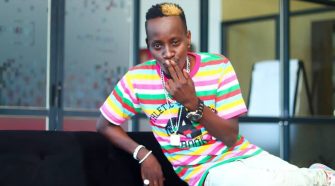