This was after Budaka Woman Member of Parliament and Uganda Women Parliamentary Association (UWOPA), Pamela Kamugo Nasiyo raised a matter of national importance who protested the use of women as objects of tourism which demeans women. The legislator further demanded that the beauty pageant be cancelled.

However, before Nasiyo could complete her submission,  she was out to order by Kira Municipality MP and opposition Chief whip, Ibrahim Semujju Nganda who cited double standards on the part of the mover of the motion.

“The same way this Parliament has been asking Hon. Kiwanda to use Quiin Abenakyo to promote tourism is the same way he allowed other people, the only difference is that this time these ones are not skinny,” Semujju said.

“People who are big in size should be used the same way Parliament was asking him [Kiwanda] to promote tourism using Abenakyo,” Nganda said.

Kasilo County MP, Elijah Okupa added that if any decision is taken to cancel the Miss Curvy contest, it would mean that all other beauty pageants like Miss Uganda must be stopped to avoid discrimination.

“How do you go ahead and attack women of different size? To me, if we want to ban the Miss Curvy contest, we should then ban it across,” Okupa said.

In his ruling, the Deputy Speaker noted that the initiative to select sexy curvaceous women is one of the many beauty pageants that are aimed at appreciating beauty.

“I have participated and watched lots of miss-things competitions (miss tourism, beauty pageants, miss universe) and if you look at what they do is basically appreciating the uniqueness of the female sex and those who present themselves properly are the ones who win eventually,” Oulanyah said.

On her part, the Government chief whip Ruth Nankabirwa requested that the matter would be further discussed when the Minister, Kiwanda would be present in the house to offer any relevant explanation.

On Tuesday of last week, the Minister launched the Miss Curvy beauty contest and said curvaceous women are one of the many items on the long list of tourism products Uganda can use to attract many tourists in the country.

“We have naturally endowed nice looking women that are amazing to look at. Why don’t we use these people as a strategy to promote our tourism industry?” Kiwanda said.

But his statement have attracted a backlash from many groups including the Archbishop of the Church of Uganda, Rt Rev Stanley Ntagali. The latest condemnation came from the Association that brings together private tour operators who said referring to curvy women as tourist attractions was wrong, and demanded an apology from Kiwanda.

The condemnation from the private tour operators comes against the backdrop of a backlash from women’s rights activists, feminists and women legislators who said the Minister was facilitating the objectification of women, which undermines the strides made in empowering women.

Over the last few days, Kiwanda’s statements have sparked a debate among Ugandans regarding the strategies being employed to market tourism, the biggest foreign exchange earner for Uganda.

While some credited him for his passion and innovations to grow tourism, they said some of his approaches were misguided. 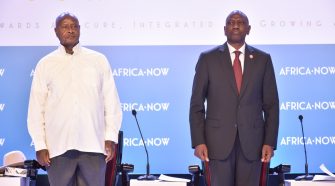