The Speaker of Parliament, Rebecca Kadaga has tasked government to come out and give an assurance to Ugandans over the status of Murchison falls whose future hangs in balance following plans to replace it with a hydro power dam.

While delivering her communication to the House, the Speaker noted that ever since the public learnt about the said plans by Electricity Regulatory Authority, there has been a lot of tension among the different stakeholders. She said this uncertainty needs to be addressed.

“On behalf of the citizens, I am seeking an assurance from government that Murchison Falls is not going to be interfered with. The country is in tension, the hoteliers are in tension, our tourism industry is under threat, I want an early assurance on this issues,” Kadaga said.

In a notice carried in The New Vision newspapers on June 7, Electricity Regulatory Authority (ERA) publicized a notice of intended application for a license filed by Bonang Power and Energy (Pty) South Africa Limited.

The notice indicated the energy firm’s intent to construct a hydro power dam near the Murchison Falls in Kiryandongo and Nwoya districts.

The proposed project is located within the vicinity of coordinates 2°16’42.6” N, 31°41’08.8” E which is actually where the Murchison waterfalls are situated.

Media reports regarding the hydro-power dam plan prompted a backlash from the tourism sector.

Several stakeholders within the sector, Uganda’s highest foreign revenue earner have since protested the move which they believe will negatively impact on tourism.

The construction of the hydro power dams has been linked to major negative impacts on wildlife ecosystem as well as tourism activities especially those that are marine related.

Last week, private tour operators under their body Association of Tour Operators in Uganda (AUTO) criticized the plan which they say will deal a big blow to the tourism sector which is the biggest foreign exchange earner for Uganda.

“Tourism is one of the big sectors. It accounts for 10 percent of the GDP and 24 percent of the exchange inflows. This means it’s the single biggest foreign exchange earner. It’s a substantive sector that we shouldn’t sweep under the carpet,” Evarist Kayondo, the Chairman of AUTO told reporters.

He said the waterfalls offer tourists incomparable sights and experiences which is why they should be preserved for the future.

The private sector is demanding that government formally issues a letter stating that it has abandoned the hydro project. Failure to do this in the next two weeks, the sector will declare an industrial action, Kayondo said. 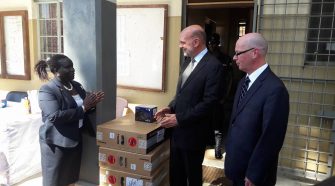