The Speaker of the Transitional National Legislative Assembly of South Sudan, Anthony Makana has assured Ugandan traders who lost their goods in South Sudan that Parliament will ensure they receive their due payment.

Makana made the remarks Tuesday while interfacing with Ugandan legislators on the Select Committee investigating payment of Uganda traders formerly trading in South Sudan.

The South Sudan Speaker assured the delegation of Members of Parliament from Uganda that his Parliament will collaborate with government of South Sudan to clear Ugandan traders’ claims.

“Our Parliament will be standing with you, once the Ministry of Finance appropriates funds for Ugandan traders in the budget, we will not tamper with it, we will pass it such that traders will be paid” Makana said.

Makana however asked the Committee to appeal to South Sudan’s Ministry of Finance to plan for traders’ payments in the forthcoming budget.

“The Ministry of Finance will table the budget before Parliament in May, when you meet them, appeal to them to include traders’ claims in the budget, once the money is in budget we will approve it,” he said.

“Parliament is interested in payment of traders, we are ready to appropriate money, but we need agreement with Sudan on genuine traders,” Nankabirwa said.

Masaka Municipality MP, Mathias Mpuuga implored Speaker Makana to use his position and push his government to verify all claimants.

“Parliament of Uganda has the money and is ready to pay but it doubts the claimants, it is seeking faster approval of claimants from South Sudan. We want your Parliament to push government to put up a verification committee and make the process faster,” Mpuuga said.

The Select Committee is set to meet various agencies in South Sudan that were engaged in the Purchase of items from Ugandan traders as per the Bilateral agreement of 2016. 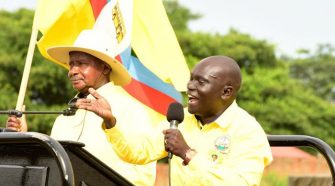