Speaker Oulanyah Fulfills his Shs120m Pledge to Church of Uganda

The Speaker had in June during the Martyrs day celebration made a commitment to participate in raising the Shs60bn that the church needs to settle the debt.

The Speaker of Parliament, Jacob Oulanyah, has fulfilled his pledge of Shs120m which he made to the Church of Uganda as a contribution towards clearing a debt owned by Church of Uganda to Equity bank.

The Speaker had in June during the Martyrs day celebration made a commitment to participate in raising the Shs60bn that the church needs to settle the debt.

According to the Speaker, Shs100m shall go to paying the loan while Shs20m shall cover the purchase of lights at the Uganda Martyrs Anglican Site, Namugongo.

Speaking at the residence of the Archbishop, Dr. Steven Kazimba Mugalu, Oulanyah said he was delighted to honour his pledge to aid the smooth running of the Church and its projects.

“I made a pledge and the onus is on me to honour it; it has not been easy to collect such a lump sum which is why I asked for six months and I am pleased to deliver as promised,” he added. 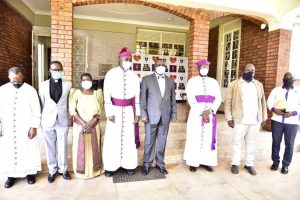 Shortly after receiving the Speaker’s pledge, Archbishop Kaziimba thanked Oulanyah, for his regular support to Church of Uganda and for the support he has enjoyed from Members of Parliament under his leadership.

Kazimba noted that it was the calling of God to have Oulanyah as one of the leaders to support the call and deliver on it.

“Many make these kinds of promises and never deliver. This implies that you are God-sent and a leader of his word; that is why God elevated you from being a Deputy Speaker to the Speaker of Parliament and he shall continue to manifest in you through various ways,” he added.

Kaziimba, also requested the Speaker to intervene in the dispute in Kumi Diocese where Rev. Charles Okunya insists on being appointed Bishop of the Diocese.

“Rev. Okunya has caused disturbance amongst the Christians of Kumi for refusing to heed the Church’s recommendation and insisted that he must be consecrated as Bishop,” he said adding that, ‘the Church will not appoint him forcefully,” he said.