Police is investigating circumstances under which a speeding commuter taxi knocked an officer of the Uganda People’s Defence Forces (UPDF) at the rank of Lieutenant Colonel, along Kampala-Hoima road, killing him instantly.

The incident happened at around 8pm on Sunday at Namungoona in Rubaga Division in Kampala.

The deceased has been identified as Lt Col Rashid Kawawa from Chieftaincy of Military Rehabilitation Center (CMRC) in Mubende district.

Police said the Colonel had parked his car by the roadside opposite a fuel station and was crossing the road for fuel when he got knocked dead by taxi Reg No UAT 082P while he was returning to his car.

“The late was driving a motor vehicle registration number UAS 373W Toyota Premio which had run out of fuel and he parked at the roadside hence crossing to Tosha Fuel Station to pick some fuel. On returning, he was knocked,” Police said in a statement.

The taxi driver immediately abandoned the vehicle and ran. Police says his search is on.

The body has since been taken to City Mortuary at Mulago national referral hospital for postmortem.

The victim’s car and the taxi have also been towed to Kampala Police Station to aid investigations. 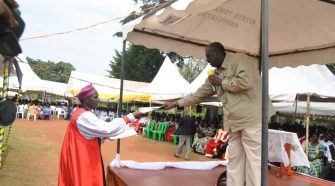