SportPesa, a gaming company, is calling for better tax administration over sports betting and gaming companies.

The Chief Executive Officer Sportpesa, Ronald Karauri, made the appeal while meeting the Deputy Speaker, Jacob Oulanyah, on Thursday, 27th July 2017 at Parliament. Karauri said taxation of the gaming sector in Uganda is a major problem largely caused by the informal gaming platforms that are difficult to regulate.

“We would like the government to simplify the tax structure especially on withholding tax and tax on gross income. Charging a fee on the initial license and an annual fee would be a better idea. We believe that gross revenue is hard to monitor especially for informal betting shops,” Karauri said.

He proposed that gaming companies should be formally set up and monitored through an online platform in order to weed out the unscrupulous betting set ups.

“We would prefer very specific and easily monitored betting shops. This will help bring in more revenue and popularise the game. It would also aid in transparency. SportPesa employs many people and will be able to support different clubs and ensure players are well paid,” Karauri added.

Karauri said that SportPesa plans on sponsoring a variety of the local Clubs, especially Express FC, the Federation for Uganda Football Association and the national league.

Oulanyah suggested that the company lobbies the government because matters pertaining to amendment in a law have to be proposed by the government.

“Revenue laws come once in a year and they might come next year in May.  I suggest that you come in and be part of the change in the law instead of waiting for the proposed amendments to be made before establishing yourself,” he said.

The Deputy Speaker added that, “let the discussions begin and a plan to establish yourselves. Let the Minister generate the idea.”

The Minister for Youth and Children Affairs, Hon. Florence Nakiwala Kiyingi said that SportPesa is primarily engaged in developing the sports sector worldwide.

“This is a young country and we want to make the young population more productive. We welcome any idea to develop the sports industry,” Nakiwala said.

Karauri said that SportPesa is a Kenyan gaming company operating in Kenya, Tanzania and the United Kingdom specialising in the development of sports. 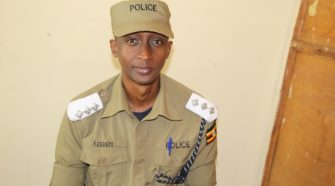