Amooti Kibuuka Francis, the LCV Chairperson of Mubende district has called upon the developers of the East African Crude Oil Pipeline (EACOP) to consider stringent environment safety measures, before, during and after the construction of the pipeline.

This was during the second public hearing for the EACOP, Environment and Social Impact Assessment Report (ESIA) held on October 23 in Mubende district.

“The developer should take into consideration that most areas along the pipeline route are already water stressed. Therefore, the mitigation measures should be adequate to prevent water shortage challenges,” he said.

The Petroleum Authority of Uganda (PAU) and the National Environment Management Authority, (NEMA) held the last Public Hearing for the EACOP ESIA Report at Lwanda Grounds in Rakai district having held similar ones in Kakumiro and Mubende districts.

The EACOP forms part of the wider oil and gas development projects in Uganda.

Ernest Rubondo, the Executive Director of the PAU said that the purpose of these public hearings is to ensure that the stakeholders from the ten (10) districts where the pipeline will traverse in Uganda and the general public verify the accuracy of the report.

“The public Hearings are an avenue where the public’s concerns are heard to ensure that they are addressed by the developer and relevant government entities. They are also part of the review process of the ESIA report to allow NEMA make a fair and just decision on the report.”

Rubondo further added that the EACOP ESIA Public Hearings that have been held now bring the total of Public Hearings held for the Oil and Gas sector project to seven having had two hearings each for the Tilenga and Kingfisher Development projects in November 2018 and June 2019 respectively.

“This is an important milestone because we are now close to the Engineering, Procurement and Construction Phase, having also concluded the FEED study and Land surveys for the EACOP project. The next stage is to ensure that the we conclude the commercial frameworks for the project, a process which is now progressing,” he said.

Dr Tom Okurut, the Executive Director of NEMA assured the PAPs and other stakeholders that all feedback on the report will be reviewed to guide the decision on the approval of the report. “NEMA’s mission is to promote sustainable development with balanced social, economic and environment well-being.”

The Minister of State for Minerals, Peter Lokeris highlighted the Government’s commercialization strategy which involves refining and the sale of crude oil.

“Several feasibility studies indicating that the Tanzania route was more economically viable than the route through Kenya were concluded,” he said.

The Minister noted that the valuation reports for the compensation of the PAPs is under review by the Chief Government Valuer (CGV).

Aziz P. Mulima, the High Commissioner of Tanzania to Uganda revealed that the process of land acquisition Tanzania had progressed significantly due to the land tenure system.

“Unlike in Uganda, for us land is under the custody of the President, and when we have such social and developmental projects, we compensate persons for the activities and developments on the land,” he said.

The High Commissioner also revealed that Tanzania had concluded the ESIA study, which is under review by the respective Government entities.

Muhairwe Jordan Walter, the CEO of Action for Environment Uganda cautioned Total East Africa Midstream B.V (TEAM B.V) that the organization was watching keenly to ensure that the environment is safeguarded.

“Consider working with the civil organizations to restore the vegetation that will be lost during the construction of the pipeline,” Muhairwe said.

The Uganda Poverty and Conversation Learning Group urged the developer to widen the scope of biodiversity while considering the mitigation measures.

Twebaze Paul, the representative of the Civil Society Coalition on oil and gas asked the developer to indicate the sources and volumes of water for use in hydro testing the pipeline in the report.

He cautioned against the generalizations of climate data for all the districts.

In a related development, Maxim Marchenko, the CEO of TEAM B.V while speaking to the media on the sidelines of the EACOP ESIA Public Hearing in Rakai retaliated the Developers commitment to the development of the project refuting claims that Total was grounding work in the region.

“What is happening right now is that we are working with the government on the required Legal Framework for the EACOP project. How long it will take, I may not know but I can assure you we are very committed to this project and work will go on,” noted Marchenko.

He also said that the environment safety considerations were made when choosing the EACOP route. “The pipeline was routed through less populated areas and areas with less biodiversity and will be closely monitored using updated technology.”

Positive impacts of the project were highlighted to include job creation. The project along with the other development projects in Uganda is expected to stimulate other industries like agriculture and tourism.

The government of Uganda has planned for the participation of Ugandans in the sector through the promotion of national content.  The district officials asked that priority be given to residents of the 10 districts of; Lwengo, Ssembabule, Kikuube, Hoima, Kyankwanzi, Gomba, Mubende, Kyotera, Kakumiro and Rakai for the jobs the project will create.

Ali Ssekatawa, the Director Legal and Corporate Affairs at the PAU in his closing remarks made on behalf of the Executive Director said one of the main concerns registered during the stakeholder consultations that were undertaken prior to these Public Hearings, was the aspect of delayed land compensation and disputes in the valuation process.

Ssekatawa added that government is working closely with the Project Sponsors to finalise the legal and commercial framework for the project to pave way for the Resettlement Action Plan (RAP) implementation process to commence.

Regarding disputes in valuation, the affected parties were advised to utilize the grievance handling mechanisms that have been put in place.

The Presiding Officer, Prof. Vincent Bagiire from the Makerere University Business School will submit a report within thirty (30) days to NEMA after the public hearings are held. The details in the report will partly form the basis on which NEMA will decide on whether to award an ESIA certificate.

The public hearing was attended by representatives from Government Ministries, Departments and Agencies, community members, PAPs, district officials, the media, professional and academia.

The oil pipeline system covers an estimated length of 1,443km from Pump Stations one (PSI) in Hoima District, Uganda to the Maine Storage Terminal (MST) located North of the Tanga, Tanzania.

From PSI, the pipeline traverses southward along the western side of Lake Victoria, crosses the boarder into Tanzania, continues to south end of Lake Victoria and turns east continuing across the Rift Valley at the Tanzanian Divergence, continuing East to its termination North of Tanga Port on the Indian Ocean Coast.

In Uganda, the pipeline covers 296Km and traversers 10 districts, 22 sub- counties, 4 town councils, 41 parishes and an estimated 172 villages and hamlets. 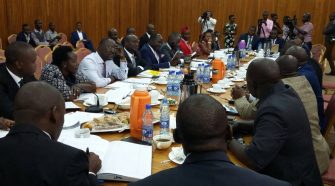