Stanbic Bank has contributed Shs 30 million towards the NSSF Kampala 7 hills hash run whose main aim is to raise money to refurbish and improve learning environments for children in KCCA schools across the city and upcountry schools in rural areas.

Speaking during the handover ceremony, Stanbic Head of Corporate Communications Cathy Adengo said, “We are delighted to be a part of the NSSF Hash run  because we believe that education is a critical transformative intervention that shapes our society today”.

“This year we have doubled our contribution from Shs 15 million contributed in 2018 to Shs 30 million in 2019. As such we are happy to join NSSF in its noble cause aimed at refurbishing the learning environments of children who go to KCCA schools across the city and schools in rural areas upcountry.”

Barbara Arimi, the Head of Marketing and Communications at NSSF while receiving the cheque appreciated Stanbic Bank’s continued support towards the Kampala Hills Hash run.

“As NSSF, we are grateful for Stanbic Bank’s contribution which is going towards joining our efforts in helping refurbish classrooms and learning environments. This is one of those calendar events that gives Ugandans, corporate entities, our members and staff an opportunity to make a significant contribution in improving the learning conditions of disadvantaged children,” she said.

This is the 4th edition of this fun non –competitive charity run and is held in partnership with the Kampala Hash House Harriers who will provide the technical support;  and Kampala Capital City Authority who are the beneficiaries of the proceeds from the run.

Having had a good turn up at the previous runs we held in 2016, 2017 and 2018, the NSSF Kampala Hash Seven Hills Run has now captured thousands of hearts who not only enjoy the 7 hills challenge, but are also passionate about children and education.

NSSF Kampala Hash 7 Hills Run will take place on Sunday March 17 and for the first time, it will be open to the wider public.

Previously, the run was only open to corporate companies that supported the cause by registering their employees as a team to participate in the run.

During a recent media launch for this year’s Hash Run, NSSF Managing Director, Richard Byarugaba said; “We realised that there are so many dilapidated schools in rural areas that are in dire need of help and as a Fund we decided to expand the initiative and include upcountry schools so that they can study from a conducive environment”.

The individual participation cost is Shs 25,000 per person while companies will participate according to the different packages that include Platinum, Gold, Silver and Bronze.

“This year, we have given ourselves an ambitious target of raising over 500 million to go towards schools here in Kampala and upcountry and are tasking ourselves, our partners and the general public to come together to support this important cause,” he said. 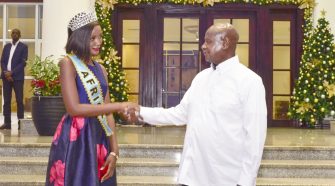