Patrick Mweheire, the Chief Executive Officer of Stanbic Bank has been appointed the Chairman of the Uganda Bankers Association.

Mweheire was elected during the Uganda Bankers Association Annual General Meeting held on May 4. He succeeds Centenary Bank Managing Director, Fabian Kasi who served as Chair for the last three years.

Mweheire will be deputised by Rakesh Jha, the CEO Barclays Bank while Housing Finance Bank’s Mathias Katamba will be new Treasurer.

Sarah Arapta who heads Citi Bank was made the new Auditor.

Mweheire, an accomplished investment banker has been at the helm of Stanbic Bank, the biggest commercial bank in Uganda for the last 3 and a half years. Over the period he has presided over Stanbic, it has steadily increase both its market share and profitability while at the same time easing its prime lending rate despite tough economic turbulence.

He has been CEO of Stanbic since December 2014. 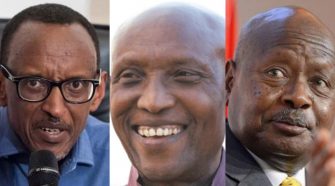