The Chief Executive Officer of Stanbic Bank, Patrick Mweheire has expressed concern over the skilling mismatch in the current education curriculum that has sidelined equipping learners with soft skills. Mweheire worries that the graduates being churned out of universities are not competent to adapt to rapidly changing dynamics in the work environment at a time when the world is embracing disruptive innovations.

Mweheire made the comments on Monday while he launched the fourth edition of the Stanbic National Schools Championship, a brainchild of Stanbic Bank which seeks to nurture entrepreneurship, critical thinking and better communication among students.

“The world is changing and in order to survive, you have to be up to date and informed,” Mweheire observed.

He elaborated that in an era where more graduates are acquiring Degrees, the only thing that can distinguish those that are employable from the rest are the soft skills such as confidence in speech, articulate communication among others.

“In the real world, it is the soft skills that count”.

This, Mweheire said is what the annual Stanbic National Schools Championship looks to achieve through engaging students in debate, essay competitions and vocational training.

He opines that government has to strike a balance between good academic grades and matching interpersonal skills while it prepares the students for the work field.

“One of the things that i see and is disappointing is – when I get a CV of somebody and it looks really great, the grades are good, but a person shows up in your office and you can’t connect the résumé to the person you are talking to,” Mweheire told the press.

He added: “And to me, that’s a massive disappointment, because the raw intellect is there, but the person can’t communicate”.

According to the Stanbic CEO, the current model that orients students to regurgitate and cram things in order to pass exams, only deprives them of the competencies to quickly adapt to changes as a prerequisite for the 21st century disruptive driven work place.

“We don’t want people to cram things from 5 years ago. We want somebody who can understand the environment, adapt quickly and change. And that’s in every industry,” Mweheire said.

He cited revolutionary innovations like, Amazon, Uber, B&B which he said have disrupted retail shopping, transport and hotel services respectively.

He said that in Uganda where people are producing 1.2 million new babies every year, there’s is potential to groom 300,000 geniuses annually, who can then contribute to transforming the economy.

Mr Martin Osuban, the Assistant Commissioner for Secondary Education in the Ministry of Education who also attended the launch admitted that the current curriculum is largely focused on academic knowledge and that initiatives like the one by Stanbic will be critical in producing effective communicators.

“Debate is by policy,part of co-curricular activities and schools should participate. That some schools do not participate is unfortunate,” he noted.

However, Osuban mentioned that the dilemma arises from the fact that most of the schools get concerned with competing, go attain good performance in academic examinations, leaving less attention to other activities like debating. 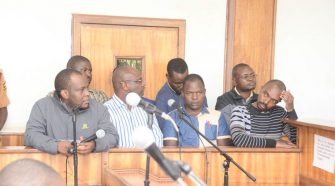