StarTimes has been unveiled as the biggest ever single sponsor in the history of Ugandan sports after securing the Uganda Premier League and FUFA Big League ‘Title and Broadcast Rights’ from FUFA at a whopping USD 7,240,000, an equivalent for Shs 28.1 billion.

The new deal was announced Thursday morning at Hotel Africana and it will cover a period of 10 years.

“We took the decision to give back to the people of Uganda through football because of the passion they have towards the game,” Wang said.

“Football touches a lot of people from the grassroots. It is our way of thanking the public for supporting our business and making us the leading pay television with 70% market share after only eight years,” he added.

FUFA President, Eng Moses Magogo while speaking at the press event said that the deal is arguably the biggest sponsorship deal in Ugandan sport, adding that today could be the turning point in the direction of Ugandan football.

“Football is developed by many stakeholders. StarTimes are part of the key external stakeholders who have contributed to the growth of the game in Uganda. We are so grateful that today we enter into a huge partnership with StarTimes,” Eng Magogo said.

While the FUFA President acknowledged that there is more effort still required in regard to supporting local football, he said the Premier League sponsorship deal is a step in the right direction.

The national football governing body, FUFA believes that the enabling environment that it has created by improving the image of the local football and setting in place visible systems and structures to improve the game is paying off.

On his part, Aldrine Nsubuga who is the StarTimes Vice President in charge of branding and marketing said; “Today is a very historic day in Ugandan football. We don’t just want to entertain football fans with foreign football. We want to be relevant to local football fans”.

“We want them to appreciate their local football and support it with a greater passion which is why we want to bring the local league in every household through our broadcast platforms,” Nsubuga added.

He said that sponsorship of club football is of great value as it helps in creating more competition among clubs.

Christine Kikomeko, the PR Manager for StarTimes during the announcement of the deal appealed to Ugandans to demonstrate the same goodwill by supporting the brand.

StarTimes is also the official sponsor of KCCA FC as well as the StarTimes stadium in Lugogo. The company said it has sofar invested up to Shs 4.5 billion in local football in a period stretching 7 years. 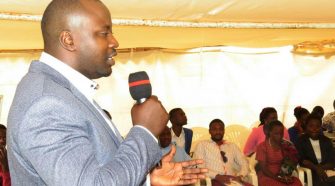