Officials from State House led by the Minister of State for Planning and Monitoring in the Office of the President, Dr Baltazah Kasirivu Atwooki and the State House Comptroller, Lucy Nakyobe have justified the Rukungiri donations that were made by President Museveni over the weekend.

The officials had Wednesday appeared before the Presidential Affairs Committee of Parliament to defend the Ministerial policy statement of 2018/19 which is at a total of Shs 274 billion.

The MPs demanded to know whether the money that the President gave out was part of the State House budget or his own funds and why such sums of money would be spent in one district.

“The 1,000 boda bodas, 25 lorries, 7 tractors, 20 minibuses and a lot of money given out to several SACCOs, we are wondering whether this one was in the State House budget,” Amero said.

The MPs noted that the Presidential donations should reflect fairness and the activities of State House should unite Ugandans other than dividing them as well as being national in nature.

However, Dr. Kasirivu blamed media for inflating the quantity of items noting however that the President under his prerogative will continue doing so as always to drive increase in Ugandans’ incomes.

The State House Comptroller as well contested the quantities that were given out by Amero, “I can imagine 1,000 motorcycles can fill up this Parliament and the so many tractors because they were only two, we shall provide the information to the committee.”

“The Money that was used for Rukungiri was part of the Budget of State House under the Donation item and we had gone to Rukungiri even before elections for Woman MP were annulled,” Nakyobe said.

“We had gone and visited Nyakagyeme sub-county and the President gave donations to four groups, and promised that he would come back in a bigger way to attend to other sub-counties that were remaining.”

According to Nakyobe, the earlier visit happened even before court ordered for fresh Woman MP elections and that Museveni had not anticipated the annullment.

“This is the time he chose with the aim of helping them improve their incomes and the items were given to groups.” 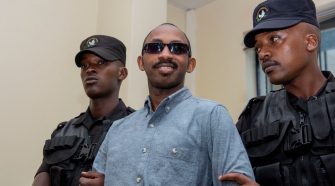