University researcher, Dr Stella Nyanzi has taken a bashing from a section of netizens especially supporters and members of opposition political party, FDC for hinting on a possibility of having Robert Kyagulanyi Ssentamu (Bobi Wine) as Uganda’s President and four-time presidential contestant, Dr Kizza Besigye as his Prime Minister.

In a Facebook post, Nyanzi, a known member of FDC asked what Ugandans yearning for change would lose if the two opposition politicians agreed to unite and have Bobi Wine as President.

“What if Bobi Wine was President and Kizza Besigye his Prime Minister? Is this as improbable as many think? What would we lose as the opposition in Uganda?” Nyanzi asked.

“I know that each of these two opposition leaders already has a cabinet of power brokers working in their respective People Power and People’s Government. Some of these power brokers vehemently oppose a merger because they fear that they may lose both position, power and proximity to the apex of governance in Uganda. But what if these cabinet members focused on the greater good of first redeeming Uganda from dictator Museveni?” she added

According to Nyanzi, infusing Bobi Wine’s boundless youthful energies with what she called Besigye’s wisdom and mature experience, would be an automatic win for the opposition.

She further suggested that Wine as President and Besigye as Prime Minister, her wish would be to have Gen (Rtd) Mugisha Muntu as Vice President, Norbert Mao as Speaker of Parliament, Peter Walubiri as Chair of Constitutional Review Council and Miria Matembe as Cabinet Governor.

“We need to radicalise and unite the opposition for revolution against dictator Museveni. What is more radical than this united opposition? This would be a main departure away from doing business as usual,” she says.

But her remarks did not sit well with staunch and renowned members of FDC, who have since asked her to pull down the post and apologize to Dr Kizza Besigye for what the call lowering him and taking his over 20 years of struggle for granted.

Many of them have used social media to express their disappointment in the researcher whom they accuse of betrayal and letting them down.

Ssegawa Cosmas, a sworn supporter of Dr Kizza Besigye commented that: “The admin of this page is an (*****) who will fail miserably in Makindye and subsequently fail Stella in Kampala central. Stella should take side now or abandoned forever. Serving two masters isn’t a guarantee of a sure win and this post is mocking Dr. Besigye who has be traumatized by people power fanatics including the admin of this page. Stella should apologise.”

But in response, Nyanze said she handles her page and writes all posts herself. She also said she had discussed the issue of Besigye being Prime Minister with him before.

“I am the only person who writes on my timeline. I have no administrator writing for me. These are my honest “what if” thoughts. In fact, I have discussed the presidency with KB (Kizza Besigye) in person, many times. I need not apologise to him for writing what I have suggested to him privately before,” says Nyanzi.

Kristeen Behimbisa, another FDC members wrote: “Bobi Wine President, Dr Besigye Prime minister? What an insult! One thing I have witnessed in this struggle, is that if one wants to leave FDC, they first insult the People’s President. And from this post, (for some reason, I will ignore the person who is using your account) I can tell your next step. All the best. Long live Dr. Kiiza Besigye.”

But Nyanzi reaffirmed that she discussed the issue with Dr Besigye before. She also notes that her thought are driven by her love for Uganda which surpasses that of FDC.

“Kristeen Behimbisa, where is the insult in my post? I have discussed the forthcoming elections with KB in person many times. I have specifically asked him about the presidency, and cherish his responses to me.

“Where is the insult in a “What if” postulation? If anyone knows me well, they know that I always speak for myself. I always write for myself. Nobody hacked into my account. I stand by my post because these are my earnest thoughts. Also, you cannot sack me from FDC. I am a paid up card-carrying member. But I love Uganda much more than I love FDC,” responded Nyanzi.

How can a Doctor Deputise a nurse? Its like saying Dr Stella Nyanzi deputise a junior lecturer on any project.

Nonsense. Who has hacked the page of Stella? This would be the biggest mistake the People’s President will have made to erase his legacy in the politics of this country.

Besigye cant be behind that (***). Go and support your LGBT and negate the academician, the
expert on health, the all time tested activist for freedom. I used to think that PhD is crowned to people that can reason but it is permanent head damage This isn’t the Nyanzi I know unless she is brain washed or her account was hacked.
Bobi wine can’t define himself and spell his names, how can he lead the son of Kifeefe?

Bobi cannot be a president of Besigye, but he can be a youth minister in Besigye’s cabinet. Such a coalition can last longer than where Bobi is the boss. I will just leave it at that. I don’t want to be misunderstood.

Imagine Bobi Wine being a President of Uganda. Yoy people are serious jokers. What capacity does Bobi Wine have to lead a Nation? How has he performed as Member of Parliament before u give him the whole country? Someone who can’t present a simple bill or motion on the floor of Parliament can’t be my president. We are not in short of leaders that we can get a whole nation and put it in the hands of a Bobi Wine, no way. 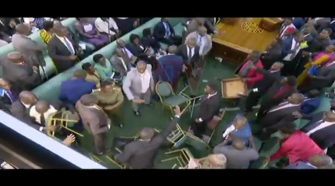