Prosecution contends that on September 16, 2018, Dr Nyanzi posted on her Facebook page suggestions deemed obscene against the President’s deceased mother and that she also repeatedly posted messages to disturb or attempted to disturb the peace, quiet or right to privacy of the President.

While delivering her judgement, Kamasanyu noted that Nyanzi’s post lacks value and doesn’t transmit any literary or scientific message and cannot be discussed openly in any community.

“It is obscene, lewd and indecent and the wishes therein could only be put forward by an immoral person,” she said.

“The post corrupts the minds of young generation. It doesn’t in anyway communicate any message, can’t be used in this country or outside. It is vulgar. It was offensive. It would offend any reasonable acceptable standards in any society,” she added.

She said there is no person with sense who would want to consume content in Nyanzi’s post since it is so obscene and indecent.

The magistrate noted that: “The post could only be made by an immoral person. It could have been packaged better if it meant to communicate anything of any sense to anyone.”

According to the Magistrate, all contents of the post are unethical and to describe a private part, nicely or negatively is unacceptable and as such, she found her guilty and convicted her on cyber harassment but found her innocent on charges of offensive communication.

In their submission, prosecution asked the magistrate to grant the convict a custodial sentence “because the post was about the President who’s the fountain of honour and his dearest mother.”

“The post was the rarest of the rare. It was a brutish attack on the person of the president and his late mother,” submitted the prosecutors.

They noted that Stella remained unregretful throughout the trial for the offence she had been found guilty of and that she wasted time of court by taking it through a whole practical trial since November 2018 for an offence she knew very well she committed.

On her part, Nyanzi who kept chanting “Viva opposition Viva”, expressed disappointment in being found not guilty of offensive communication.

“I am very disappointed for not being found guilty of offensive communication against Yoweri Museveni. Why have you found me guilty of cyber harassment? I intended to annoy Yoweri Museveni, we are tired of his dictatorship,” she noted.

She reiterated that people should not feel sorry for his children who have stayed nine months without her since her arrest, saying they celebrate her efforts to end “dictatorship” in Uganda.

Nyanzi has as well told the magistrate that she doesn’t fear being imprisoned since she is fighting a good cause. She only pleaded to her to instruct the prison authorities to avail better hygienic conditions in the cells.

The magistrate has adjourned the case to tomorrow Friday August 2 for sentence.

She faces a fine of Shs 1.4 m or prison not exceeding 3 years. 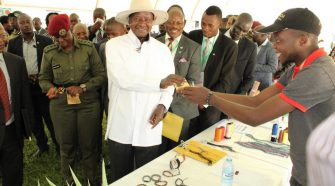