Popular academic researcher and rights activist, Dr Stella Nyanzi has Tuesday turned 46 and she says her 45th year was the most profound year of her life.

Dr Stella Nyanzi, a Makerere University researcher was released from Luzira prison in February this year after her 18-month sentence for insulting President Yoweri Museveni.

She was found guilty of cyber harassment of the president last year, after writing a poem on Facebook that allegedly insulted the President’s mother.

But the High Court said Nyanzi’s right to a fair trial was violated because magistrates denied her the right to identify, prepare and call defence witnesses.

Today, as she marks her birthday, she says she is proud of the successes her 45th year has brought her.

“Today is my birthday! I turn 46 years old…. My forty-fifth year was perhaps the most profound year of life. I gained much and I lost much. The losses, I choose to bury. The gains, I celebrate boldly and publicly,” she posted on Facebook.

“I was charged for two crimes against dictator Museveni, tried, found guilty of one crime and not guilty of another crime, convicted, sentenced, processed as an appellant, and acquitted”.

“I spent most of the year detained in maximum security prison where I shook the system. I left my writings scratched deep into the walls of the solitary confinement cells in the Condemned Section of Luzira Women Prison”.

Nyanzi further outlines her wins including the civil case in which she sued the government of Uganda for slapping a travel ban on her. Court lifted the travel ban and awarded her damages worth Shs 50m.

She says she looks forward to airports re-opening so she can test whether or not her name was removed from the No Fly List.

“I also won Makerere University in a court case where I sued them for refusing to enforce the orders of the university appeals tribunal, namely to reinstate my job, pay all my dues, and promote me. Court awarded me one hundred and twenty million Uganda shillings, and ordered the university to comply with the earlier orders of the tribunal”.

The vocal scholar and feminist has also recently received several awards of recognition for her writings, human rights activism and scholarship.

“I received support from many friends and allies; some known to me in person and many unknown to me physically. My children were mothered and mentored by a huge throng of people, assuring me that even when I die, they will continue to be loved,” she added.

The activist who is a strong critic of President Museveni has recently announced her intentions to run for political office – as the Woman MP for Kampala. She is a supporter of the Opposition political party, Forum for Democratic Change (FDC).

She says she will now be turning her bedroom into a base for her political bid.

“As the children are busy preparing for me a birthday meal fit for a queen, I am converting my bedroom into a base for my forthcoming political campaign. I am starting my forty sixth year of life with a bang. I am reaching for the skies and taking a leap into the unknown”. 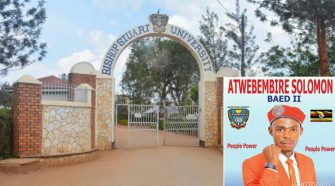