Former President of Sudan, Omar Al-Bashir who was deposed by the military last week, has been sent to the country’s maximum prison, CNN reported Wednesday.

Bashir who ruled Sudan for three decades was overthrown by the military last week following months of nationwide protests.

He was transferred to Kober prison, in Khartoum, a prison said to have been his spot for detaining and persecuting his political opponents.

The 75-year-old’s whereabouts have been unknown since a military takeover on Thursday, when the country’s new rulers said he was being held “in a safe place”.

The move to put him behind bars could be one of the efforts to calm down protestors who were not moved by the detention of Bashir and remained camped outside the military headquarters, demanding that the military hands the country’s leadership to civilians.

Sudan’s military rulers have made some concessions to protesters, including the sacking on Tuesday of Prosecutor General Omer Ahmed Mohamed, but demonstrators fear their uprising could be hijacked by the military.

The army however insists it will only hand over power after a two-year transitional period supervised by the military council. It says it ousted Bashir to meet the demands of the people and only wants to see a peaceful Sudan.

Bashir is needed by the International Criminal Court (ICC) for genocide, war crimes and crimes against humanity he allegedly committed in Darfur between 2003 and 2008, leading to death of over 300,000 people.

Sudanese military rulers have already said they will not expedite the former President, but will subject him to trial themselves using the country’s Judicial system, despite calls by the UN to have him expedited.

Uganda’s State Minister of Foreign Affairs, Okello Oryem, on Tuesday revealed that Uganda was ready to offer the ousted Sudanese leader asylum if he wants it.

“If Bashir asks for Asylum in Uganda, that is a matter that can be considered by Government because he was a co-guarantor of the peace agreement of South Sudan and we must give him credit for that,” Oryem told reporters at Parliament on Tuesday.

Meanwhile, the African Union on Wednesday issued a 15-day ultimatum to the military in Sudan to relinquish power to civilians, short of which, the AU will suspend “the participation of the Sudan in all AU’s activities until the restoration of constitutional order.” 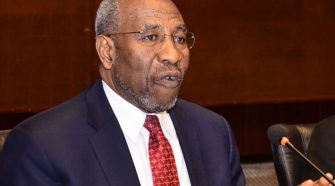