Sudanese military has Thursday arrested, long serving leader, Omar Al-Bashir after months of nationwide protests. The demonstrations started last year in December protesting the increase in prices of basic needs, before pushing for an end to Bashir’s regime.

On Thursday morning, the state owned television and radio station said the army was headed to make an “important announcement”.

This prompted thousands of people to throng the streets of Khartoum and outside the military headquarters celebrating in anticipation of a possible deposition of Bashir from the country’s top political seat after three decades.

Hours later, the country’s Vice President and Defence minister, Ahmed Awad Ibn Auf in a televised address to the nation, said that the military had removed President Bashir from power and announced there would be a two-year transitional period.

“The armed forces will take power with the representation of the people to pave a way for the Sudanese people to live in dignity and here I declare in my capacity as the defence minister, chairman of the supreme committee to get rid of this regime and to arrest the head of the regime in a safe place,” said the Defence minister.

“I also declare the formation of a military transitional council to supervise the two year period, to counsel the constitution of Sudan 2005, to declare the state of emergency for three months and a one month’s curfew from 10pm to 4am in the morning,” he said.

“Airspace is closed for 24 hours and all borders are closed until further notice.”

Meanwhile, celebrations continue on the streets of Khartoum, although some analysts say by announcing a transitional military council at the helm of Sudanese leadership, more protests are like to erupt since the Professional association which spearheaded the protests demanded an overhaul of the Bashir leadership and to have a civilian-led government.

Many Sudanese people on social media are calling on the demonstrators to continue protesting until civilians are handed power.

President Bashir came to power in 1989 when, as a brigadier in the Sudanese army, he led a group of officers in a military coup that ousted the democratically elected government of prime minister Sadiq al-Mahdi after it began negotiations with rebels in the south.

He is also wanted by the International Criminal Court (ICC) for allegedly directing a campaign of mass killing, rape, and pillage against civilians in Darfur and it us not clear whether the military with hand him to ICC. 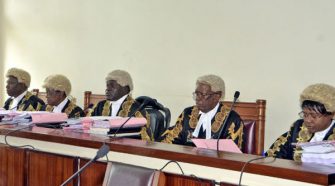 Inside Justice Barishaki’s Ruling on the Age Limit Amendments