KABALE – A man in Kabale who was suspected of attempted murder fell off a cliff and died while he was fleeing from locals who were pursuing him.

The deceased has been identified as Mucunguzi Odomaro, 37, a resident of Nyarungwe cell, Kaharo sub-county in Kabale district.

He is said to have been a habitual offender who was two weeks ago released from Ndorwa prison after serving five years on murder charges.

The Regional Spokesperson for Police in Kigezi, Elly Matte said that upon release from Ndorwa Prison, Mucunguzi attacked his elder brother (Kabarekye Pakalasio) and severely cut him before escaping.

Matte said that on Sunday morning, Mucunguzi surfaced and “wanted to finish off the whole family over a land dispute with the father, a one Michael”.

The deceased who had recently been given a portion of land which he sold was demanding to be given more land. However, his family members objected this.

“They said he couldn’t take the balance, because the money had been used to treat his brother whom he had cut”.

This prompted Mucunguzi to confront them and in the process, the family members made an alarm which attracted other village mates.

“As he was escaping from being lynched, he fell off the Kabaraga cliff, rolled down the valley and ended up in a trench where he died instantly,” Matte said.

Police was notified and visited the scene where Mucunguzi’s body was taken to Kabale Referral Hospital mortuary for postmortem.

“I want to condemn this. It is unfortunate that the children who are supposed to protect you are the same people who want to take your lives,” Matte said. 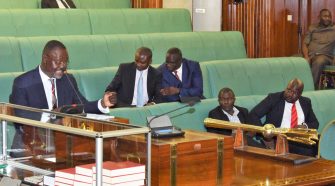