The Commissioner General of Uganda Revenue Authority (URA), Doris Akol has advised government to reconsider granting businesses tax waivers, saying it is unfair to compliant taxpayers and that these waivers have not brought about any positive impact.

She revealed this on Monday during a news conference at the URA headquarters in Nakawa while responding to queries from the press.

The debate on tax waivers, bail outs and tax holidays for businesses that are struggling and not making profit remains a controversial one, with many arguing government should not be wasting public resources in favour of businesses whose troubles most times result from poor management.

Others oppose the trend of waiving taxes for foreign investors which bring about unfair competition to the disadvantage of local firms. Also, some of the beneficiaries of these waivers have abused the privilege by closing shop the moment these tax holidays elapse.

Commenting on the issue on Monday, Akol described tax waivers as a revenue leakage that needs to be minimized. She said there has been no impact especially regarding the behavior of beneficiaries.

“Tax waivers is revenue lost. It is revenue that would have been collected but can now not be collected because it has been waived,” the URA Commissioner General said.

“Arguments have been made for tax waivers to enable businesses to stay afloat. But we also see that tax waivers have not changed tax payer behavior”.

She added that: “Therefore the jury is still out there on whether tax waivers are a good way of encouraging compliance. At URA we think not. We think it is just a revenue leakage point”.

In May this year, Parliament allowed government to write off all unpaid tax arrears (by government) amounting to over Shs 426 billion while passing the 2019/2020 tax policy measures.

The tax policy measures were among the policies tabled before the Parliament by the Minister of State for Finance, David Bahati in the Bill seeking to amend the Tax Procedures Code Act, 20l4.

The decision by Parliament followed a protracted debate in the House with several legislators raising a number of reservations over the decision.

Bahati told legislators that the unpaid taxes amounting to Shs 426bn arose as a result of government’s obligation to pay taxes on donor-funded projects that require counterpart funding from government.

The Minister said his decision follows the fact that the same request had been made during the budgeting process last year but MPs had rejected it and had also declined to appropriate funds for the tax arrears.

“What we advocate for as the revenue collector is for these waivers to be minimized because we don’t see a change in behavior by those who have enjoyed waivers before,” Akol said on Monday.

“We hope governemt looks at this seriously and minimize waivers of taxes”.

She said tax waivers are unfair to the compliant taxpayers and that it creates an imbalance. 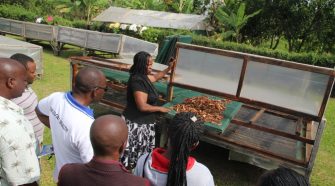