Sixteen-year-old Jacqueline Babirye is struggling to fend for her four siblings and protect herself from sexual abuse by village leader following the imprisonment of their parents.

Babirye, a resident of Kabaganda village in Buwenge Sub county, Jinja district says they are at the verge of starvation as their bread winners were remanded.

Babirye’s parents, Ruth Mutasa and William Mutasa were remanded to Kayiti prison in Namutumba district on May 29 for allegedly assaulting their Village Chairperson, Geoffrey Babalanda and theft of his Shillings 3 million.

However, Babirye reveals that the disagreements between her parents and their local leader began when he made sexual advances towards her.

She explains that her parents didn’t welcome the idea and confronted Babalanda when they spotted him standing near a borehole leading to a fight.

According to Babirye, her parents were arrested after the incident and arraigned in court, which remanded them.

Babirye wants police to protect her from the chairperson who she says has continued pestering her at night.

Babirye says that she is epileptic and lacks the capacity to ably lookout for her siblings who at times fail to return home.

Ali Kilume, a resident of the area says at times Babirye suffers epileptic attacks while cooking and the young ones are left at the mercy of well-wishers.

Babalanda dismissed the allegations as baseless.

“The matter is already in court and all I want is justice because those two assaulted me in public, they should pay for their crimes,” he said.

Willigas Kasaikya, the coordinator of village chairpersons in Buwenge Sub County wants warring parties to negotiate and process bail for at least one of the suspects so as to save the children from uncertainty. 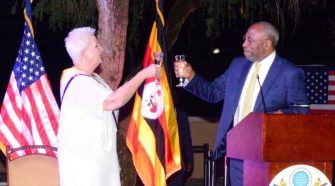