This was during a joint committee on Defence and ICT chaired by the ICT chairperson, Annet Nyakecho who had invited the Minister of Security, Gen. Henry Tumukunde and other agencies to discuss the status of SIM Card registration.

Government passed a deadline on August 31 on which all Ugandans must have registered their sim cards before being switched off.

Tinkasimire accused of Col Abiriga of advocating for stay of SIM card registration yet on the other hand he advocates for lifting of the presidential age limit.

“Many people haven’t registered, not by their fault but due to reasons beyond their control caused by delays on the part of government; I find the submissions by Abiriga quite disturbing, he is the same person calling for stay of the simcard registration deadline yet he is advocating for lifting of the age limit,” Tinkasimire said.

There rose uproar from the members and the two who were close to each other begun pointing at themselves and exchanging bitterly almost boxing one another.

Kawempe South MP, Mubaraka Munyagwa also lashed out at Abiriga urging him to drop the campaign saying it is not in the interest of Ugandans.

At this time, Ntoroko MP, Gerald Rwemulikya put Tinkasimire to order noting that every Ugandan has a right to an opinion and Abiriga should therefore be left free.

In response, Tinkasimire said, “your opinion however should be reasonable, it should reflect adult age.”

Tinkasimire later moved a point of procedure wondering whether the committee was proceeding correctly by going on with a meeting that had Abiriga involved.

“I don’t want to meet this man in my committee; I wasn’t aware we were going to meet with people like Abiriga,” Tinkasimire noted.

The committee Chairperson, Nyakecho informed Tinkasimire that Abiriga is a member of the Defence Committee and has a right as a legislator to attend any committee sitting as an ex-officio urging him to stop insulting Abiriga over his personal opinions. 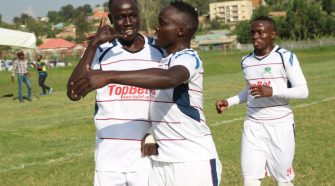