Ugandan weekly newspaper, The Observer, has closed operations citing the curtailment by the restrictions resulting from government directives aimed at preventing the spread of coronavirus.

‘The Observer’ said on Tuesday that it is henceforth closing the offices and suspending the publication until further notice.

The Observer Media Ltd regrets to announce closure of our offices & suspension of publication of The Observer until further notice. We have been curtailed by the ongoing #COVID19 preventive measures. Our online platforms will continue operating & keeping you updated pic.twitter.com/OelPauGay7

The closure of the newspaper underscores the massive hit that several businesses have taken as a result of the Coronavirus pandemic which has so far left over 690,000 people infected and 33,106 dead globally.

Uganda has so far registered 33 confirmed cases of COVID-19 with no deaths.

As economies globally reel from the impact, many companies in different sectors have been forced to close down as uncertainty grows.

In Uganda, government on Monday announced a lockdown and a daily curfew starting 7pm throughout the whole of Uganda.

“All other movements should stop. Let people stay in-doors in their homes except for the cargo-transporters,” the President said on Monday.

Both public and private means of transport have also been banned, leaving most workers with no means whatsoever to get to work.

The President says this freezing of movement will last 14 days from the April 1. The ban on private means of transport, he said, was because the exception that had earlier been given has been abused risking further transmission of the virus.

In 2013, The Observer newspaper which since its launch came out once a week, decided to scale up so as to make tri-weekly news publications.

This was sustained for four years until 2017 when the publication reverted to a weekly newspaper largely due to financial constraints that print media in general is grappling with. 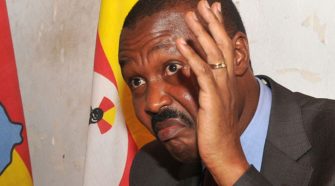 I Quit FDC Due to Endless Fights, not Because I Lost Presidency – Muntu