Police in Kabale is investigating a case in which unknown elements broke into offices of Kabale University and stole 16 desktop computers monitors along with their Central Processing Units (CPUs).

The theft incident occurred on Tuesday night, according to a Police statement.

Authorities at the university learnt of the incident in Wednesday morning after discovering the university registrar’s office and that of the director post graduate school had no padlocks.

Each of the two offices was missing a computer while 14 others computers were stolen from computer lab. The thieves gained entry through the behind window.

Police has appealed to the public to volunteer information that could assist in apprehending those responsible.

“Whoever sees anyone selling or fraudulently owning such items, should report to the local authorities so that are apprehended and brought to book,” SP Elly Matte, the Spokesperson for Police in Kigezi region said.

The computers are said to be engraved with letters KAB.

“If you see that any computer part is tampered with, trying to erase that, please let anyone is in authority know, so that such people are apprehended and charged accordingly”.

Matte said Police is investigating where the university security personnel were at the time the burglary occurred.

He said Police obtained some exhibits from the scene of crime which could help in extracting finger prints of the perpetrators.

“Our people must learn to desist from acts of lawlessness. They should learn to survive out of their sweat, not out of free things,” Matte added. 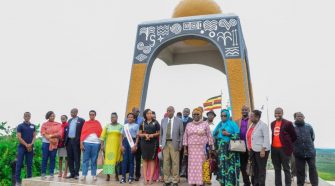 It’s 500 Years Since the Biharwe Eclipse Which Affected Buganda, Ankole and Bunyoro Kingdoms