President Yoweri Museveni has said he will fire all medical doctors involved in industrial action.

The President had issued directives implemented yesterday for doctors from the military, Police and Uganda Prisons to be deployed at the National Referral Hospital Mulago to handle emergency cases as doctors remain on strike.

Speaking at a rally in Karambi Sub-county Kabarole District this afternoon, the President vowed to replace the striking doctors whom he said had betrayed him.

“We had selected a committee to review salary disparities of civil servants in the country and it was about to complete its work when the doctors decided to strike leading to loss of all lives. They betrayed me” President Museveni said.

Doctors represented by the Vice President of the Uganda Medical Association, Prof. Pauline Byakika today told Parliament’s committee on government assurance that their decision to lay down tools came as a last resort after several of government’s pledges were not upheld.

President Museveni said today that doctors who do not want to work will regret their actions.

“This is intolerable; we shall fire doctors who don’t want to work. How can you strike and let people die?,” he said. 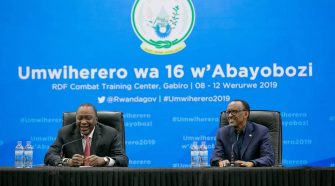