The situation is calm in Arua municipality amid heightened security presence as voters take to the polls today to elect their new Member of Parliament.

The former MP, Ibrahim Abiriga was assassinated near Kampala as he drove home in June.

A total of 46,838 voters are expected to cast the ballot across 65 polling stations, according to Electoral Commission.

By 1pm on Wednesday, aspirants for the MP seat, Nusura Tiperu of NRM and Bruce Musema of FDC had already voted. Other candidates who have already cast their ballots are Nyakuni Alfred, Robert Ejiku and Bavuga Aganasi all Independent.

While speaking to the press, Tiperu said she was optimistic about her victory, saying that she will be counting on women who form majority of her support base.

“Whereas I would wish to win, i don’t think it should be a do or die. It’s been my male counterparts fighting each other,” she said.

She urged the electorate and her fellow candidates to conduct a peaceful election saying that Arua is a business town, and that the residents need assurance that they will not be left disunited and that their shops will be safeguarded.

“To my colleagues, although we are campaigning, we are people of the same area and must leave it peaceful,” Tiperu said.

Although the elections remains calm, there are reports of low voter turn up in many of the polling stations.

There was an incident in the afternoon where security personnel was forced to rush in at Golden Courts Hotel after one of the candidates, Jackson Lee Atima alleged that individuals in the NRM camp were stuffing ballots inside the hotel.

Sixteen (16) candidates are vying for the Arua municipality parliamentary seat. One of the Independent candidates, Kassiano Wadri is likely to miss out on voting following his arrest on Tuesday in connection with the violence that happened on the last day of campaigns in Arua town. 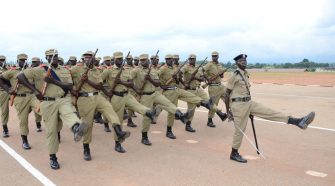