According to a source in security, Odongo was arrested on Monday night around his home near Kampala after he threatened to shoot at UPDF soldiers on duty.

The source says the UPDF soldiers were on Sunday following up some reports related to food distribution to vulnerable communities in Kampala amid the Covid-19 pandemic.

Odongo who is said to have been in the company of two other people obstructed the soldiers and placed them at gun point.

According to the source, the soldiers who apparently did not want to cause a scene, withdrew from the area but immediately reported to their commander about an armed civilian who pulled a gun at them obstructing official duty.

On Monday night, joint security operatives led by police visited the area to investigate the reports. A search of Odongo’s home was mounted and 2 SMGs and a Pistol were recovered. One of the SMGs is said to be carried by his escort in Kampala while he moves with one SMG and a pistol.

The source says Odongo attempted to run away but took cover in a corridor upon hearing the sound of gunfire when a bullet was shot in space to halt his attempt to flee.

This news site has it on good authority that security agencies had earlier picked reports about fake intelligence that Odongo presents to CEOs of government agencies and the business community and in turn extorts money from them in exchange for their freedom.

“He has been terrorising and extorting from the business community by pulling illegally acquired guns at innocent people. His 40 days are up,” an ISO operative told this reporter.

Odongo is also accused of hacking into systems and in turn extorts money in order not to make details of his victims public.

“He is a known hacker picked from the street by our boss. He was not within our ranks and he should not have been armed,” another ISO operative said.

“We were all sidelined and our duties were assigned those quacks who keep forging intelligence reports. Imagine the embarassment Odongo has now caused by attempting to shoot at UPDF. If the soldiers did not exercise restraint, there would be a blood bath,” an operative observed.

Asked why he thinks ISO should not work with civilians, the operative said: “Far from it, the nature of our work involves civilians, we handle internal security. But, we are trained to compartmentalize information and not to arm informers with SMGs. It was not correct to arm Odongo who was picked from the steeet.”

Other operatives who spoke to this news site upon learning that we had launched investigations into the arrest of Odongo decried low pay for regular staff yet others who were described as “street quacks” take home hefty salaries.

“Odongo is not an established staff. He is a civilian, and works as an asset but he is paid higher than even senior directors,” one operative revealed.

Asked what ‘asset’ means in ISO terms, the operative warned against being probed.

“Why do you want to know the meaning of our terms. Are you probing me? I have told you the problem. I cannot now behave like quack ISO operatives who reveal everything. They forge reports and leak their own fake reports to newspapers. I’m above that.” 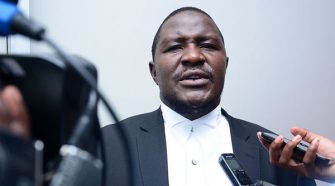