The Uganda Peoples’ Defence Forces (UPDF) has reaffirmed that discipline is one their core values and that any deviation from it is punishable.

Thee Defence Spokesperson Brig Gen Richard Karemire, has responded by the African Centre for Treatment and Rehabilitation of Torture Victims (ACTV) that indicates that the army has overtaken police in torture.

The said report was quoted by a daily on Tuesday saying that during the 2018-2019 period, the total number of torture cases received by ACTV that were committed by the army were 559 compared to 441 by Police.

However, when contacted by SoftPower News, the Defence Spokesperson Brig Gen Richard Karemire, said ACTV should have contacted the Ministry of Defence for its input before publication of the report.

“Once we receive the report, we will study it and respond appropriately,” Brig Gen Karemire said.

In a Tuesday tweet, he reaffirmed discipline as a core value of the UPDF and said that torture is illegal and can never be the forces’ method of work.

He also said that UPDF’s actions at home and abroad speak to the forces’ professionalism.

“Only UPDF in our history has made discipline its core. It is on record that individual mistakes have been investigated and punished. Torture is illegal and will never be our modus operandi,” says Brig Gen Karemire.

The army has on several occasions come out to condemn acts of  some of its personnel who manhandle civilians and indeed many of them have been arrested, tried and sentenced, including the most recent case in areas of Kisaasi in Kampala, when men in uniform were captured on video kicking a civilian.

The army arrested the soldiers and said they don’t and will never condone acts of indiscipline within their ranks.

UPDF has over the years been commended as a professional force which is subodinate to civilian authority.

On top of defending the country, the force continues to engage in several rescue missions aimed at saving lives of Ugandans. The force has been involved in several civil military operations including the rescue of citizens from mudslides in Bududa district and floods in Kasese district.

UPDF is renowned for its contribution to regional peace and stability operations, as well as the rest of Africa; Liberia, Somalia and Central Africa and South Sudan, among others.

In an interview with this news website recently, Karemire said that the army has a system of disciplining its personnel who deviate from its code of conduct.

“It is important to note that not all our personnel have misbehaved, the cases of indiscipline are individuals who at times get off the line and we take action, we don’t cover-up their mistakes,” Karemire told SoftPower News.

“If you make a mistake, we correct you but there is also room for punishing you in accordance with the established laws. Indeed you have seen many of our personnel and LDUs taken to Court, tried and sentenced,” he added.

He explained that UPDF is built on four pillars which include patriotism, pan-Africanism, discipline and the ideology of being a pro-people force, which he said distinguish UPDF from the previous armies. 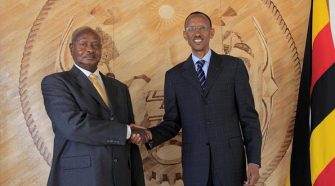