After suffering torture and imprisonment for 28 years and surviving death row in 2014, Evans Africa Bright Gabula would later allegedly face the worst forms of torture at the hands of Internal Security Organisation (ISO) operatives led by their boss, Col. Frank Kaka Bagyenda.

The revelation came as the Human Rights Committee of Parliament has commenced investigations into the allegations of torture of Ugandans in different safe houses across the country following an outcry by several members of the public through their representative in Parliament.

On Wednesday, the committee interacted with Gabula who narrated his ordeal while in the different torture chambers for crimes he never committed.

Gabula told legislators that his torture story began way back in 2014 at the hands of Nixon Agasirwe Karuhanga the former commander of Police’s Special Operations Unit who is currently on remand in Luzira prison.

“Upon release from prison in 2014, I was rearrested by Nixon Agasirwe who is now a prisoner, he tortured me brutally for four months, he told me that during this period I would be charged with treason and was told to give evidence against Dr. Aggrey Kiyingi to say that upon release, I have been in touch with him and that he is trying to destabilize the government of Uganda,” Gabula said.

He said that he refused to adhere to the demands that were put forward by Agasirwe noting that he could not give false evidence against a person he had no contact with.

“This caused me more problems and I was tortured severely until one day the then Minister of Internal Affairs came to the safe house in 2015, found me being tortured and ordered Agasirwe to have me released,” Gabula narrates.

Legislators heard that upon release, Gabula started picking up his life, got married and given birth to my first children only to be arrested on 25th April, 2019.

“I was going to work at the publishing company were I work and as I was approaching Nambole, I saw plain clothed men wearing jackets who arrested me but fortunately I was on phone calling my lawyer over business matters.”

Gabula alleged that upon his arrest, he was taken to Okello House where he met Col. Kaka Bagyenda who demanded that he would work as his key witness in pinning the former IGP, Gen. Kale Kayihura on accounts of treason and the recent murders in the country with the aim of distablizing the security of the country.

Gabula said that he was promised to be given Shs100m and released immediately but refused the offer noting that despite having been tortured by Agasirwe, he didn’t know anything about Kayihura and he could not give any false evidence against the two.

“Kaka promised me to see death after refusing to agree to their proposal. I was later taken to a safe house in Nalukolongo were I met over 100 prisoners but in the evening I was transferred on Kaka’s orders that I should not mix with any other prisoners,” Gabula said.

He observed that he was transferred to another safe house called Base 2 in Kyengera were he met about 50 prisoners both men and women as well as children.

“I was later transferred to Base 1 in Kyengera from were I learnt that they have got 21 bases across the country according to the prisoners that I interacted with. I was chained on the hands and on the legs, I could not stand or sit but only squat and this happened for 72 days. I would excrete in the same place as well as eat like a dog, I would only be unchained after some days to take out my waste, ” Gabula narrated while shedding tears which moved several legislators.

Gabula told legislators that in form of a miracle, on June 30, one of the officer came and told me that he would aid his escape from the safe house since he was to be transferred to a safe house in Kalangala Island were he would be executed.

“He took me out of the cell, put me in a waiting car and drove me home, that is how I got released but ever since then, I have been trailed by the ISO operatives and my life is under threat. Even when I was coming to Parliament, I saw some of those people that tortured me making calls around my home and even when I reached Parliament saw similar people,” Gabula noted with tears rolling down.

He requested Parliament to ensure that he can be secured from those that are trailing his life only desiring to have him rearrested and killed.

Addressing the matter during the plenary sitting, the Speaker of Parliament Rebecca Kadaga asked government to ensure safety of all Ugandans who may come out as witness before the committee.

“I appeal to government to observe human rights, if there is nothing to hide, no one should be followed if they say something about the safe house. We said we are a democratic country, we believe in human rights, rule of law, let us allow rule of law to prevail in the country without people being harassed,” Kadaga said.

She added, “I also appeal to government to give security to members who are following up this issue because they might also be intimidated so that they don’t reach the safe houses.” 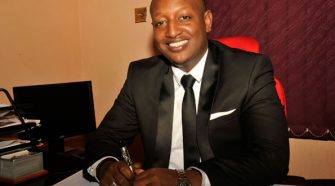