The association that brings together tour operators in Uganda says the talk of a planned construction of a hydro power dam at Uhuru falls situated about 100 metres away from the Murchison falls, is a ploy by government to hoodwink Ugandans. Government’s intention in the long run is to destroy the scenic Murchison waterfalls, they say.

They say Uhuru waterfalls which by nature are seasonal and often dry during dry season makes it unfeasible for a hydro power dam since the water flow needed to generate electricity would be inconsistent.

Government signed a Memorandum of Understanding with M/S Bonang Energy and Power Ltd, a South African company leading a Consortium that includes among others Norconsult and JSC Institute Hydro project, to undertake detailed feasibility studies for the dam project.

In August, Cabinet was informed of the Uhuru falls project but it (Cabinet) halted the process. However, Energy Minister, Eng Irene Muloni recently revealed that a Cabinet sitting held a week ago reviewed the August decision. Cabinet agreed that a feasibility study be undertaken on the Uhuru falls site.

This is in a bid to make a scientifically informed decision, Muloni said.

“According to Vision 2040, for Uganda to achieve the desired socio-economic transformation, it will require to have 41,738 Mega Watts by the year 2040 thus increasing the country’s electricity consumption per capita to 3,668 kWh,” she explained.

“In addition, access to the national grid will also have to increase from the current 26% to over 80%”.

But tour operators led by Evarist Kayondo, Chairman of Association of Uganda Tour Operators (AUTO) told reporters on Tuesday that government needs to protect both Uhuru and Murchison falls premised on their environmental, social, direct and indirect economic value to Uganda. They are demanding that President Yoweri Museveni reverses the Cabinet decision.

“We are here to tell the world that the Murchison falls must not be tampered with. That the feasibility study is a gimmick to deceive Ugandans that there was any scientific study, and that there is no 25 kilometers separating Uhuru and Murchison falls,” Kayondo told reporters from a campsite next to Murchison falls where over 100 tour operators traveled to reaffirm their campaign to save the waterfalls.

Uhuru falls are said to have resulted from heavy rains that caused an overflow in waters about the same time Uganda gained independence in 1962. 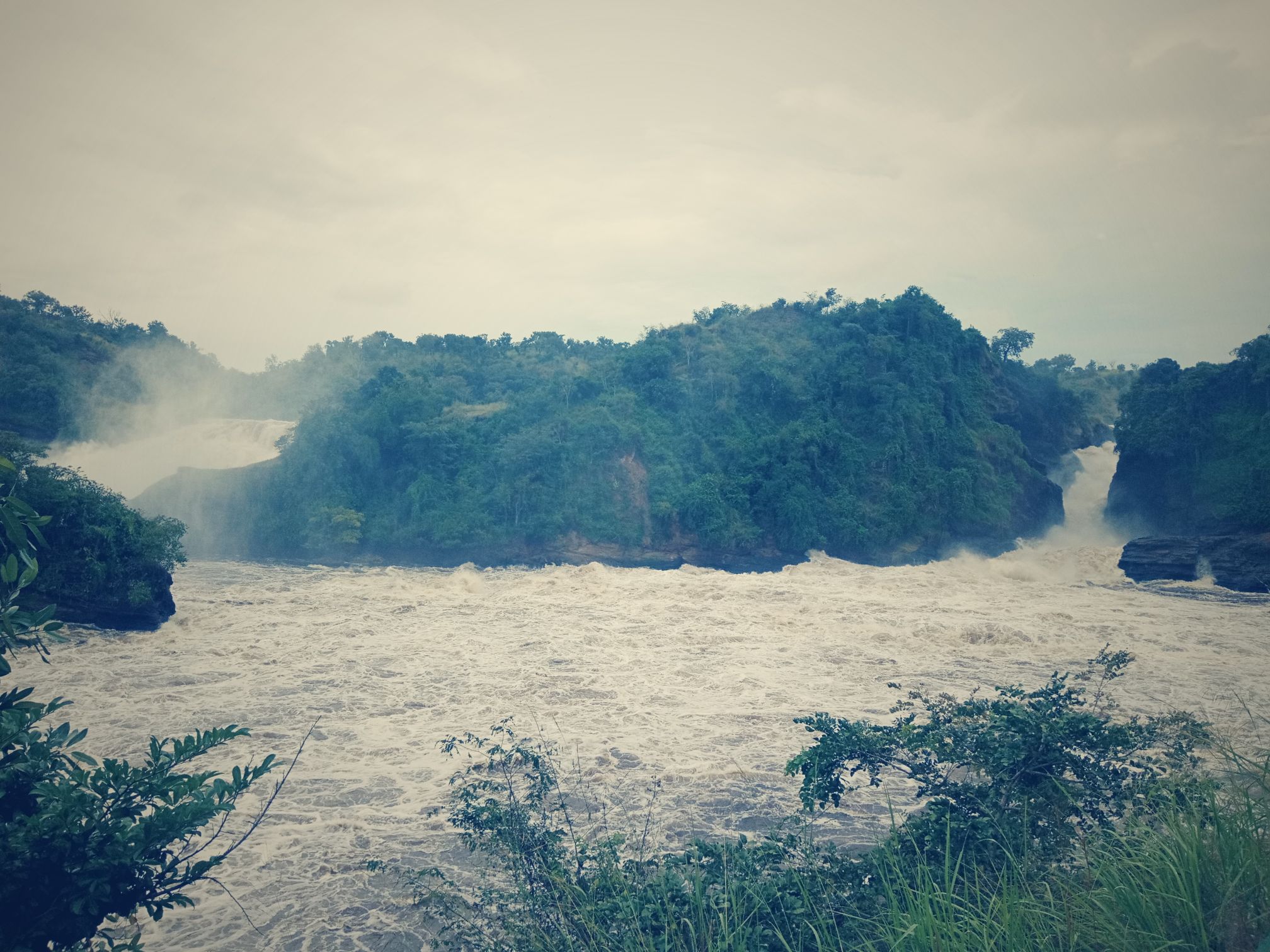 “Uhuru can only happen when we have much rain. Once it is a dry spell, this water dries down and there is hardly any water on the Uhuru side. So the mainstream falls is Murchison falls which is the most powerful falls world over, only matched by Victoria falls (in Zambia) and Niagara falls (USA)”.

At least 32 percent of Uganda’s tourists visit Murchison waterfalls where the gigantic 1 kilometer-wide Nile River squeezes itself into a 7 meter-wide gorge, causing a fascinating scene of thunderous movement of the waters. It is a natural wonder.

“It is an experience which is admired by all the tourists who come here. If we loose the one third of Uganda’s tourists (who visit Murchison), we are losing a lot. What attracts tourists to the Murchison falls national park are the waterfalls themselves,” Kayondo said.

He said tourism contributes a lot (10 percent of the GDP and 25 percent of foreign exchange inflows). He explained that the tourism sector and attractions such as Murchison falls are of high economic value even when government invests little (0.4% of the 2018/19 national budget) in the sector.

“This water is not bought, it is not designed by government. It flows naturally and the people who come to watch it end up paying us money and spending money in Uganda. Why do you delete this natural heritage and then borrow so much to construct a dam?”


He questioned the logic of government destroying a natural tourist attraction to invest in electricity that won’t be used since the country already generates surplus electricity.

Kayondo says the sector is skeptical about government’s assurance that the dam at Uhuru won’t affect Murchison falls especially since the same promise was made when initial plans for the Bujagali power dam first came up. Later, the Bujagali falls were replaced by the dam.

“Then they constructed Isimba dam. At the time, we were worried about the white water rafting. We lost that fight because the rafting experience was largely affected. We are worried that once there is construction (at Uhuru), they are targeting Murchison falls”.

The operators say the seasonal Uhuru waterfall are nothing but a mere ploy by government to hoodwink the conservation campaigners when in actual sense it is Murchison falls that is being targeted.

“By the way, it is interesting to learn that the company doing the feasibility study is the same company which has been contracted to do construction, just in case the study favors them. We are ready to lose our lives here to protect our heritage”.

He said the campaign to save Murchison falls will be made a political issue if government doesn’t halt the dam project.

“And we are even ready to tell the electorate to vote these guys out if they are not willing to protect what they (electorate) entrusted them with. They (government) no longer mean any good to Uganda,” Kayondo said amid cheering from the group of tour operators.

He said tourism does not only benefit tour operators but the entire value chain – the national airline, the immigration officers, transporters, fuel dealers, hoteliers, farmers, craft makers among others.

Tour operators are challenging Cabinet members to actually visit Murchison waterfalls in order to get firsthand experience rather than rely on the “blatant lies” being peddled by some officials whose interests, they say, are suspect. 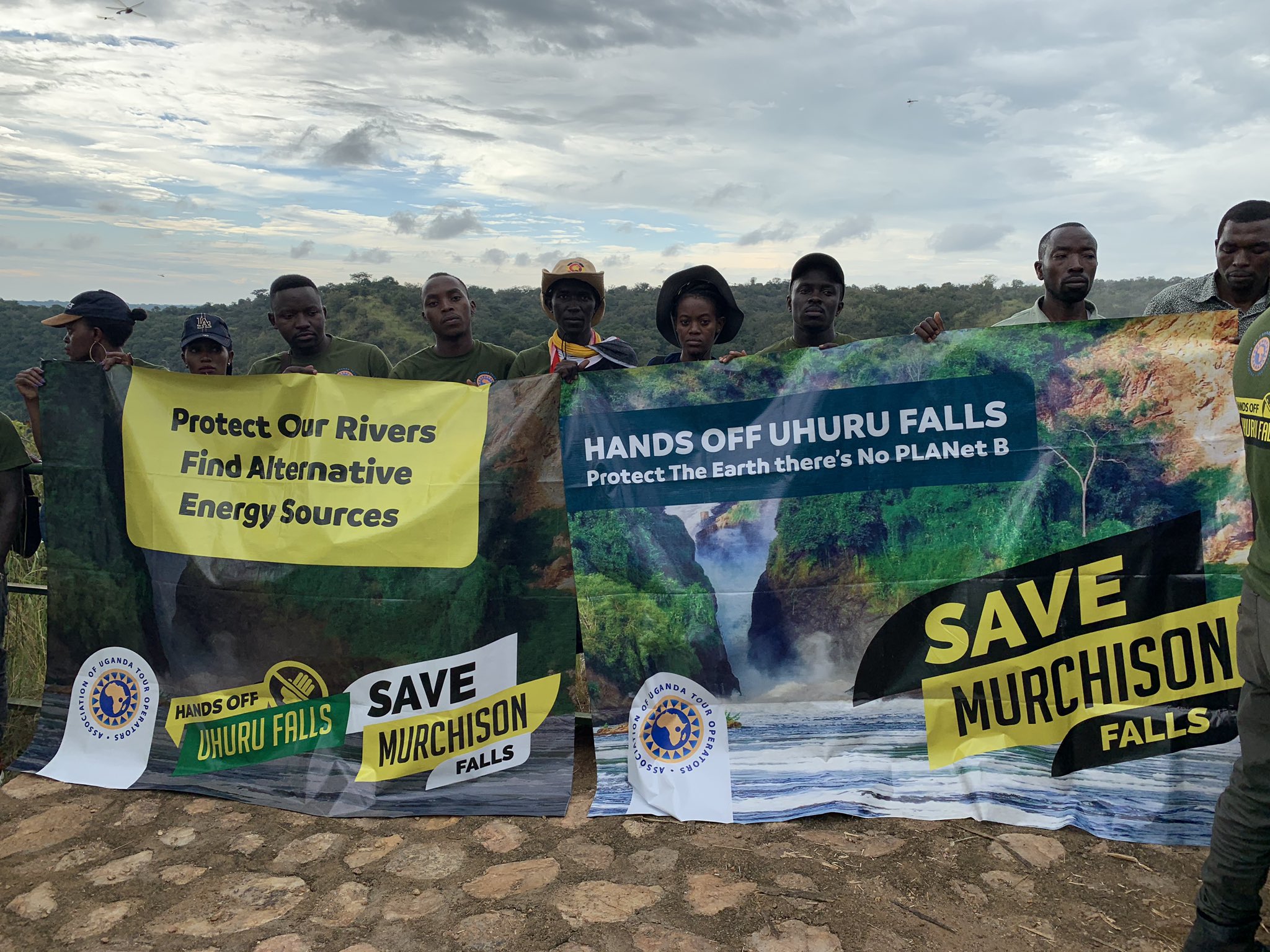 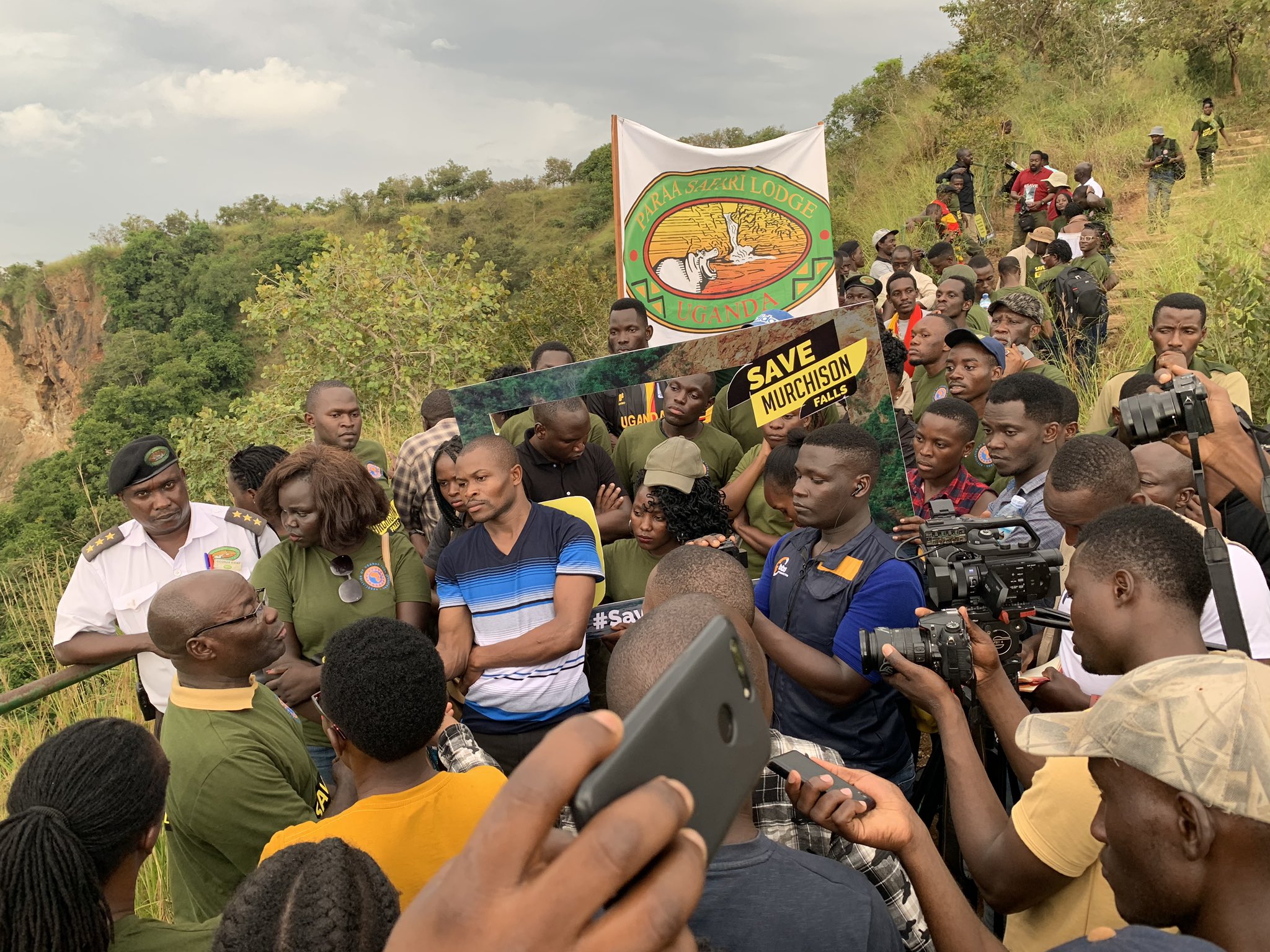 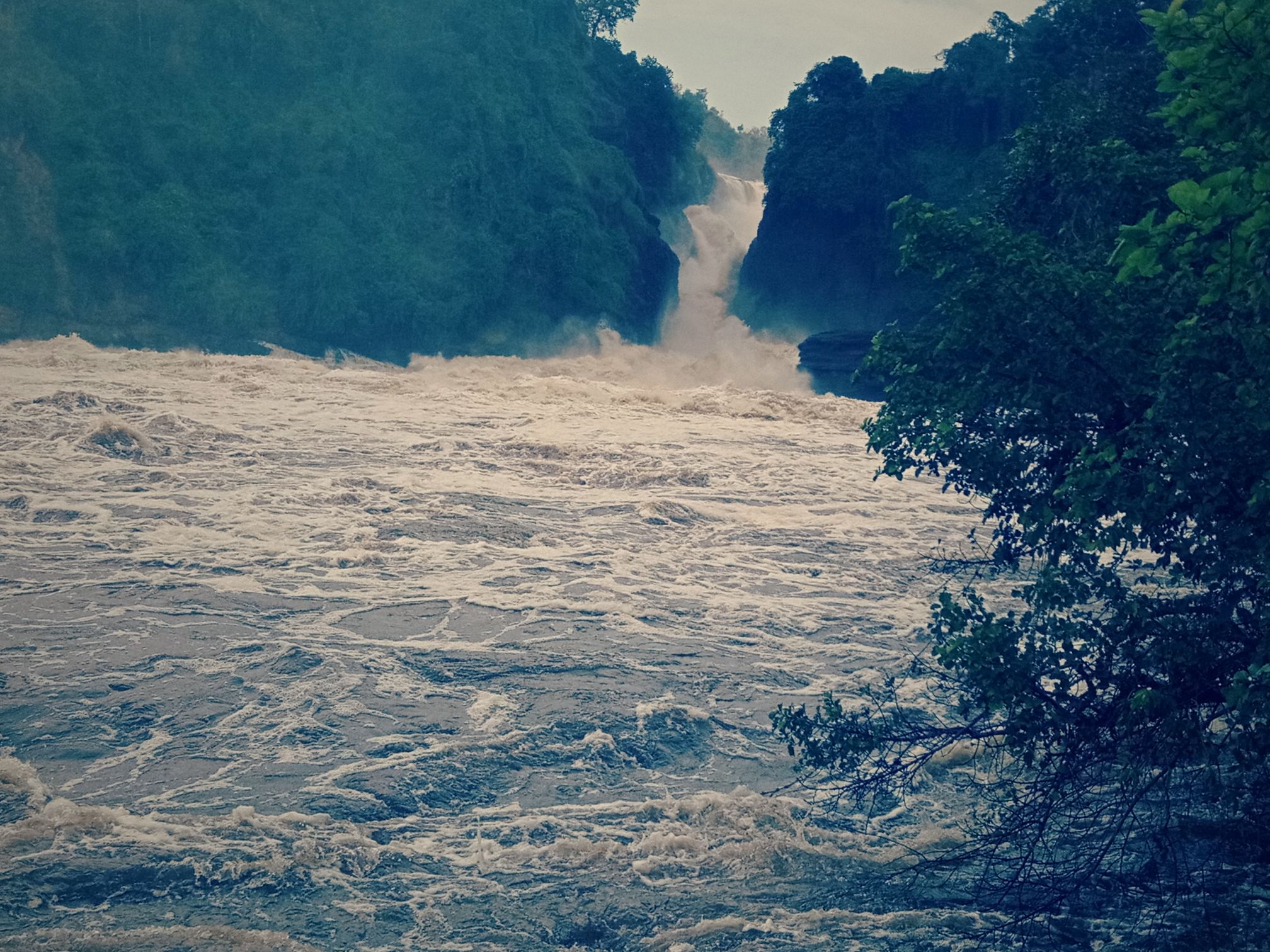 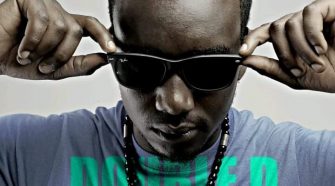