Barely two months after conservationists launched a protest against an attempt by a private investor to destroy part of Bugoma forest, a habitat to over 500 chimpanzees, and replace it with a sugar plantation, another controversy is brewing.

This time, one of Uganda’s most spectacular attractions – Murchison falls – is what is under threat. It follows a notice published in one of the newspapers, which indicates that a private company intends to construct a hydro power dam along River Nile in the Murchison falls national park area.

The June 7 notice was issued by the Electricity Regulatory Authority (ERA). In the notice, the regulator acknowledges receipt of a notice of intended application for a license from a company known as Bonang Power Energy (Pty) Limited.

Bonang, a South African energy firm intends to generate and sale electricity from a hydro power plant proposed to be established near Murchison falls in Kiryandongo and Nwoya districts.

The proposed project is located within the vicinity of coordinates 2°16’42.6” N, 31°41’08.8” E which is actually where the Murchison waterfalls are situated.

“Bonang Power and Energy (Pty) Limited) intends  to undertake detailed feasibility studies and other activities leading to the development of the above-mentioned Power Project whose proposed installed capacity is 360MW. The generated power will be sold to the Uganda Electricity Transmission Company Limited and fed into the national grid,” the notice by ERA adds.

Section 30 of the Electricity Act 1999 allows for directly affected persons of such a project as well as local authorities in the area where the project is planned to be established, to make comments and lodge objections (if any) in respect to the notice to ERA.

The said persons/authorities can only lodge their complaints within a period of 30 days after the publication of the notice.

However, several stakeholders within the tourism sector, Uganda’s highest foreign revenue earner, are protesting the move which they say will have a negative impact on tourism.

The construction of hydro power dams has been linked to major negative impacts on wildlife ecosystem as well as tourism activities, especially those that are marine related.

For example, if too much water is stored behind the dammed reservoir, segments of the river downstream from the reservoir can dry out.

Thus, most hydroelectric operators are required to release a minimum amount of water at certain times of year. If not released appropriately, water levels downstream will drop and animal and plant life can be harmed.

In addition, reservoir water is typically low in dissolved oxygen and colder than normal river water. When this water is released, it could have negative impacts on downstream plants and animals.

Also, though there are a variety of methods to minimize the impact (including fish ladders and in-take screens), fish and other organisms can be injured and killed by turbine blades.

According to statistics provided by the Ministry of Tourism, tourism arrivals grew from 1.37 million in 2015/16 to 1.54 million in 2018, representing an 18 percent increase. In the same period, the foreign revenue generated by the sector grew by 19 percent from USD 1.37bn to USD 1.63bn

Lilly Ajarova, the chief executive of Uganda Tourism Board (UTB), the government agency responsible for promoting tourism, termed the plan as “madness”.

“This is madness. Who in their right mind would want the destruction of Murchison Falls? An iconic feature that is spectacular and none like it elsewhere,” Ajarova posted on Facebook.

She says the ecosystem of Murchison Falls National park has both endemic and endangered species that if destroyed will not only affect the nation but the global community with species extinction, climatic change, among others.

“There are options for the required development. The Murchison Falls must not be destroyed”.

Amos Wekesa, the proprietor of Great Lakes Safaris and a tourism enthusiast was extremely bitter when contacted by SoftPower News to comment on the replacement of the falls with a dam.

“You know, when I first heard about this, I thought it was a rumour. But on contacting the people at Uganda Wildlife Authority, they actually said they were aware about it,” Wekesa told this news website on Saturday.

Wekesa describes Murchison falls national park as being the best tourist attraction in Uganda and one of the best on the African continent. The falls themselves are the heart of the national park, he said, wondering why anybody would consider destroying it.

“First was Bujagali, then Karuma. You cant destroy everything in one generation,” he said.

Whereas the government has in the recent past doubled down on investment in electricity generation which President Yoweri Museveni insists is a critical enabler for industrialization, Wekesa believes time has come for Uganda to consider other energy alternatives like solar.

“Europe is getting rid of hydro power dams. Uganda lies on the Equator. Why cant we explore solar. Are these people (Bonang Power Energy (Pty) Limited) even Ugandans? Do they care?” Wekesa queried.

President Museveni is on record saying for the first time in history, Uganda has surplus electricity. This, according to Wekesa, is even more reason such new hydro electricity projects are unnecessary.

He says the now endangered park, has the potential to draw in more revenue (up to USD 500m annually compared to Masai Mara which earns Kenya USD 200m annually. This is because Murchison falls has more attractions and activities to offer in comparison to the Masai Mara.

“Masai Mara has a game drive and visiting the Masai villages. In Murchison, you can do a boat trip, hike to the top of the falls, do chimpanzee trekking and safari drives”.

On what happens going forward, Wekesa says “everybody is mad and meetings (involving sector players) will begin on Monday”.

But what is perhaps the most breathtaking of all is the actual waterfalls where the waters of River Nile, the longest river in the world, force their way through a small slit within the rocks, which is just 7 meters or 23 feet wide, and topples to 141 feet below with a thunderous roar forming a residual water stray that forms a beautiful rainbow. 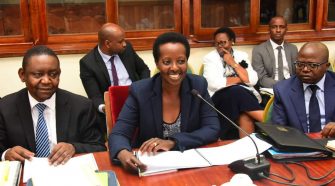