Security agencies in Uganda have said they are coordinating to ensure the missing American tourist and Ugandan driver are rescued.

The army spokesperson, Brig Richard Karemire told SoftPower News on Wednesday that the security agencies are prioritizing the rescue of the two as well as continued securing of all other tourism sites in the country that remain safe for both foreign and domestic tourists.

It follows an incident on Tuesday between 5pm and 7pm, when four armed men reportedly ambushed a tourist van that was on a game drive in the Queen Elizabeth national park.

The incident is said to have happened near Katoke in Queen Elizabeth national park, according to a statement issued jointly by Uganda Wildlife Authority (UWA), Uganda Tourism Board (UTB) and Police.

Subsequently, two people including an American national and the driver (Ugandan) of the van were taken by the yet to be identified people. The victims have been identified as Kimbley Sue Endecott (American female tourist) aged 35 and Jean Paul, the driver.

“All security agencies are coordinating to ensure that the tourist and guide are freed unharmed,” the Uganda People’s Defence Forces (UPDF) spokesperson, Brig Karemire told this news website.

“Be reassured that the rest of the tourism places in the country remain very safe with this incident being just an isolated one,” he added.

The other occupants of the van who were left behind managed to contact the lodge and they were later rescued.

“The lives of the missing persons are a key priority. We appeal for calm as we find a lasting solution to this issue,” Uganda’s tourism agencies and the police said in the joint statement.

Uganda has for more than three decades enjoyed good record of security and safety for tourists with no such incidents.

Security is always guaranteed by a network of Tourism Police, Uganda Wildlife Authority wardens as well as the military. 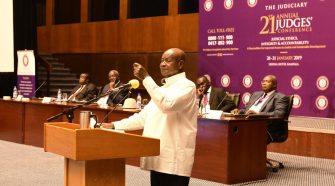 You’ll Get a Pay Rise Once the Economy Improves, Museveni Tells Judiciary