The Uganda Police says Kimberly Sue Endicott, an American tourist and her Safari guide, Congolese Jean Paul Mirenge who were both rescued Sunday April 7, from captors were actually found in the thick Isasha forest in the neighbouring Democratic Republic of Congo (DRC).

The duo was abducted at gunpoint while on a drive in Queen Elizabeth National Park by four unknown gunmen who used Kimberly’s phone to demand a USD 500,000 ransom.

Authorities would later launch a joint security operation to have them rescued, and indeed, on Sunday, government of Uganda in a tweet announced success of the operation.

While addressing reporters at the Police headquarters in Naguru, Police spokesperson, CP Fred Enanga, said victims were “released because of the implicit threat of the use of force, after the armed captors, knew they were being pursued”.

“At this stage we cannot provide specific details on how the rescue mission was accomplished, for future operational security and tactical reasons,” Enanga said.

He said the Police and other security agencies in Uganda are working together with their counterparts of the DRC to arrest the culprits.

“The reason why we are working with our counterparts of the DRC, is because the victims were recovered from the Eastern side of Ishasha on the side of the DRC,” Enanga daid.

How was the operation executed?

Without delving into details, Enanga said security couldn’t “move full swing” for fear of jeopardizing the safety of the victims.

“We established the hideout based on our capabilities, but because of the sensitivity and also being a high risk operation, it would not be prudent for us to move full swing, because it could easily cost the life of the victims. So, that is why we had to strategize in the manner that we did,” Enanga said on Monday.

Ishasha forest extends from Kanungu to the DRC and according to Enanga, the area is characterised by many armed groups. He however said that, preliminary investigations indicate that the perpetrators could be collaborating with other criminals in Uganda.

We have certain leads which indicate that there could be a network locally within Uganda based on information we have, Enanga said.

He said that security of the citizens and all visitors to Uganda are a priority of Police.

The Police spokesperson reiterated that the successful recovery of the captives, serves as a reminder to “those enemies who want to harm our own people including visitor’s, that we will do everything possible within our means to defend them”.

Different local and international press have been reporting that the release of the two captives was made after payment of the USD 500,000 ransom to the captors. The New York Times reported on Sunday that the ransom was paid by World Frontiers, a safari company.

But Police say they don’t offer ransom to rescue victims from kidnappers.

“If there are any arrangements of a ransom, may be by the family or camp manager, that is something we will let you (journalists) explore, but as Police and government of Uganda, we don’t do ransom and we have never encouraged that,” the Police spokesperson said.

President Donald Trump of the United States of America on Sunday expressed pleasure with the news of the rescue of the abducted American citizen.

In a tweet, he said: “Pleased to report that the American tourist and tour guide that were abducted in Uganda have been released. God bless them and their families”.

On his part, President Yoweri Museveni described the kidnappers as “isolated pockets of criminals” saying the country is safe for tourists.

“We shall deal with these isolated pockets of criminals. However, I want to reassure the country and our tourists that Uganda is safe and we shall continue to improve the security in our parks,” the President tweeted.

“Come and enjoy the Pearl of Africa”.

Meanwhile, the Inspector General of Police, Martins Okoth Ochola is later today expected to hand over Kimberley Sue Endicott, to Deborah Malac, the U.S. Ambassador to Uganda, at the American Embassy in Kampala. 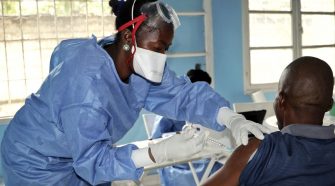