Sunday was the 6th edition of Kampala city festival and multitudes of people flooded the city streets to partake in the festivities. As early as 9am in the morning, the entire stretch from Kampala Road to Jinja Road along with adjacent streets were filled with funfare and vendors selling merchandise.

Whereas there was plenty for the eyes to feed on, the loud buzz of activity coupled with the deafening music sound from select spots was hard to miss. Kampalans including adults, children all had something to loosen up to and take their attention from their usual routine.

To leave up to the tradition, many had their faces painted in color while occasionally posing for selfies or photographs at the numerous mobile studio booths. Attending the much anticipated festival is something city dwellers have developed so much pride for.

Not often do walkways and street lanes in the central Kampala turn into eateries, music concerts, drinking parlours and shopping points. The showcase did not spare Uganda’s popular roadside snack, the Rolex.

Although the city was clogged with people, these numbers did not translate into business for the hundreds of traders who anticipated good sales. Many that this website spoke to said it was a bad day and all of them attributed it to the bad economic situation.

In comparison with the 2016 Kampala festival, this year’s was bad for business, many told SoftPower. Their explanation for the few customers was almost synonymous – “people are poor”.

Uganda’s general economic outlook has been subdued majorly due to a long persistent drought that affected agriculture production and subsequently hiked prices in food crops. It is for this reason that ordinary Ugandans might be more cautious to spend.

Nsabira Vincent, a trader in caps commented; “The festival hasn’t been as good as we expected. Last year was better. People don’t have money. I think the majority of people are villagers who only came to see what happens in the festival.”

Beyond the fact that for a long while no single person had stopped by to buy, Nsabira’s facial expression spoke of disappointment.

Another young man, Alex Kasozi who had a chapati stall said he started selling at 2pm but the sales were low and people were stingy with money.

“People are poor. Last year, it was easy for someone to buy a Ush 500 chapati at an extra cost of Ush 500 but today, people are bargaining. Yet we bought the materials expensively,” he said.

Kasozi paid Ush 40,000 to KCCA to vend in the festival but he was skeptical about making a profit.

He, however, was impressed by the fact that many young people took part in doing business in the festival as opposed to previous years.

Despite the scorching sunshine that dominated the better part of the day, those selling cold drinks didn’t get as many customers as would have been expected. Close to Total fuel station at Jinja Road, three ladies stood chanting loudly to woo buyers to their drinks. Among them was Angela Nakabugo whose assessment of business was not different from the other traders.

“Buyers are few. As you can see, we are here shouting our voices out but no one stops by. We might incur losses 10 times,” Nakabugo said.

“Last year, we made money and managed to spare some of it to enjoy ourselves but today is worse. And it isn’t just us,” she added pointing to a man nearby whose merchandise of drinks was similarly still piled by 8pm.

Another trader, Ismael who brought two sacks of popcorn to the festival told us he had only sold half of one sack by 8pm. He started selling as early as 5am on Sunday.

“The festival hasn’t been the best for us. I sell these popcorns at Ush 500 and Ush 1,000 but still, you can see the sack is almost full. I will find someone with a porpcorn machine and just sell what’s left to them,” he lamented.

This impression only implies that the returns for those trading in non edible merchandise like clothing were even lower.

To some, especially entertainment lovers, this year’s festival may have offered more than they anticipated but to those who sought to make a profit out of the festivities, a lot remains at stake. 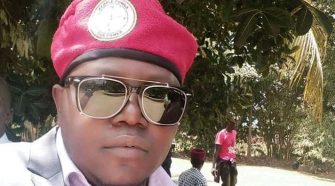