Locals in Bitoma sub-county, Bushenyi district are engulfed in grief after five people, many of them children, were struck dead by lightning on Tuesday evening.

The incident happened in Kakira village Bitooma sub-county in Igara west constituency Bushenyi district and the deceased are said to have been tea collectors.

Bushenyi district Chairman, Jaffar Basajjabalaba confirmed the tragedy. He said it followed a  heavy down pour which forced a total of about 50 people who were collecting tea leaves to rush to a nearby shelter.

Unfortunately, during the rain, lightning struck and killed 5 people instantly. Some other 25 people were left with serious injuries.

He advised locals to stop gathering when it is raining.

“We advise people not to gather on the same place because it’s anticipated that people condense blood that’s why they are vulnerable to be struck by lightning. The same applies to cattle,” said Basajjabalaba

Some of the workers who survived death asked government support the families of the deceased. They also appealed to the management of the tea factory to install  lightning conductors on the collecting points.

“Our bosses should not only remain in their offices silent, let them install lightning conductors on the collecting points” one of the survivors said. 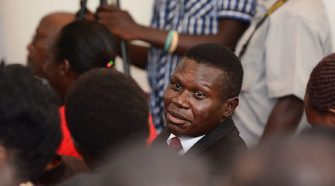